The 420kg (930lb) UAV has a 7.2m (23ft) wing span and endurance of up to 14h with a 70kg-plus payload, and can operate at altitudes up to 19,700ft. Each Falco system ordinarily comprises four UAVs with electro-optical/infrared (EO/IR) payloads, a ground control station (GCS) and communications and support equipment. However, the manufacturer's first customer is believed to have ordered four systems of five UAVs each. 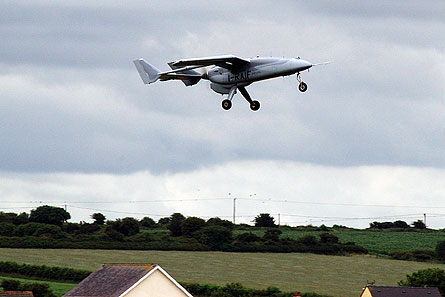 The production platform differs from development examples by using a modified UAV Engines rotary powerplant providing 80hp (60kW) and driving a three-blade propeller. It carries additional fuel in its inner wing section to boost endurance, and has a miniaturised avionics mission package that has freed fuselage space for extra payload.

The UAV can be operated from semi-prepared strips or catapult-launched from a naval vessel, and an automatic take-off and landing system and vehicle-mounted GCS are now in development.

The company declines to provide details on the sale of Falco air vehicles. However, it has previously received authorisation to sell the system to two countries including Pakistan, which military sources have identified as the likely launch customer.