AFSOC open to UAVs for Armed Overwatch, but concerned about required manpower

The US Air Force Special Operations Command (AFSOC) is open to considering unmanned air vehicles (UAVs) for its Armed Overwatch programme, but is concerned the unmanned aircraft would require too much manpower.

The Armed Overwatch programme aims to acquire inexpensive aircraft to conduct intelligence, surveillance and reconnaissance (ISR) and air-to-ground strikes against terrorist groups. AFSOC has not decided on its final requirements, but is looking to buy commercially available aircraft for the role and is planning aircraft demonstrations in the coming months. 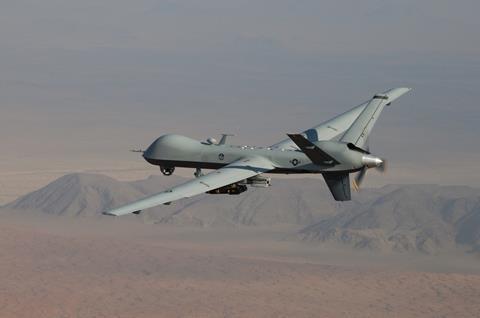 “I don’t know that an unmanned platform would not be a good fit for Overwatch” Lieutenant General James Slife, AFSOC commander, said at the Air Force Association’s Aerospace Warfare Symposium on 25 February. “Part of what we’re hoping to find is, are there optionally manned or unmanned platforms that may be able to meet the requirement? That’s part of what we’re looking for in our demonstration.”

As the US Air Force’s most senior officer with a Remotely Piloted Aircraft (RPA) certificate, Slife says he has some concerns based on his own experience flying the General Atomics Aeronautical Systems MQ-9 Reaper.

“My own experience is that the only thing that’s unmanned about the RPA business is the cockpit. There is a tremendous manpower footprint that goes behind that,” he says. “The MQ-9 is a challenging airplane from an infrastructure perspective because of the runway length and the infrastructure required on the ground to operate it. It is a challenging platform to operate.”

AFSOC wants its Armed Overwatch aircraft to operate from austere air strips in remote locations, in some cases.

“It needs to be a light footprint. It needs to be able to operate in remote areas in small disaggregated formations,” says Slife. “That doesn’t mean that the MQ-9 couldn’t be made more compatible with the mission. It just means we haven’t seen it yet.”

Slife says he does not know if there would be UAVs present at upcoming demonstrations. Previously, AFSOC has talked about manned light attack aircraft such as the Sierra Nevada/Embraer A-29 Super Tucano or Textron Aviation Beechcraft AT-6 Wolverine as candidates for Armed Overwatch.