The Lockheed Martin F-35 Lightning II’s modernisation is two years behind schedule and its cost has risen by $1.5 billion.

The Block 4 upgrade - a modernisation of the relatively new stealth fighter’s software and hardware - was initially to be delivered by 2024, but now will not be handed over until 2026, according to a report released by the Government Accountability Office (GAO) on 12 May. 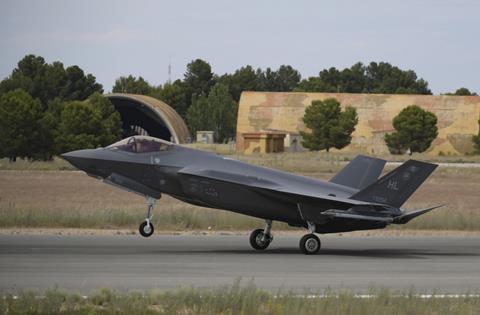 Problems with the programme also pushed up the cost on the modernisation effort to an estimated $12.1 billion, says GAO. What’s more, the government agency says that estimate doesn’t fully account for the total cost of the initiative as the Department of Defense (DoD) has excluded spending prior to 2018 and projected spending after 2024 in its count.

In response, the F-35 Joint Program Office says it plans to start including Block 4’s total costs in future accounting.

In January 2018, Joint Program Office rolled out a new strategy for handling software and hardware changes to the F-35, including Block 4 upgrades, such as avionics changes, electronic warfare updates, radar enhancements and integration of new weapons. The incremental strategy is called Continuous Capability Development and Delivery and is based on agile software development methods which are prominent among Silicon Valley technology companies. Lockheed Martin touted the method and claimed it would reduce software development problems.

However, even with bite-sized tasks on its plate Lockheed Martin was unable to deliver over the past two years.

“According to the plan outlined in its May 2019 report to Congress, the F-35 programme was going to deliver eight Block 4 capabilities in 2019. However, the programme delivered only one—a software capability called the Auto Ground-Collision Avoidance System (Auto GCAS),” says GAO. “This capability enables the aircraft to perform an automatic recovery when it predicts that the aircraft will strike the ground. This was ahead of schedule as the programme had originally planned to deliver this capability after 2019.”

Development of the other seven capabilities is taking longer than planned and now the programme anticipates their delivery in 2020. Auto GCAS is not unique to the F-35 and was first fielded in the Lockheed Martin F-16.

Lockheed Martin claims the agile development method has accelerated some features ahead of schedule, such as nuclear weapon integration and improvements to moving-target weapons, like the GBU-49 Enhanced Paveway II.

For its part, the Joint Program Office claims the software has “demonstrated the capability and stability to execute all required missions”.

For its part, Lockheed Martin claims it is seeing progress. “Lockheed Martin is working closely with the F-35 Joint Program Office to ensure the F-35 programme continues to mature and provide the warfighter the game changing capability they have already effectively employed in combat,” says the company.