The US Air Force Research Laboratory (AFRL) completed a series of “record-breaking tests” of a scramjet engine in November.

The hot-fire tests were conducted on the ground at the Arnold Engineering Development Complex Aerodynamic and Propulsion Test Unit at Arnold AFB in Tennessee, the AFRL said on 15 December. The scramjet engine was developed and manufactured by Aerojet Rocketdyne. 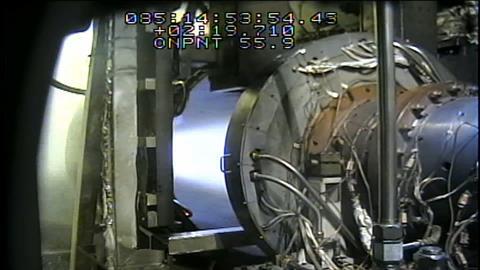 The scramjet engine tests come as the AFRL also finished sled testing new “high-speed” warhead technology at Holloman AFB in New Mexico in November. The new warhead appears likely for use on in-development hypersonic missiles. The AFRL did not immediately respond to a request for comment.

The two technology tests come as the US Air Force (USAF) plans to test launch its AGM-183A Air-launched Rapid Response Weapon (ARRW) for the first time this December. That weapon is a boost-glide hypersonic missile being developed by Lockheed Martin. The service anticipates starting production of ARRW in 2021.

ARRW’s boost-glide method of hypersonic flight is considered simpler and easier to develop than the air-breathing engine type that is being pursued by Aerojet Rocketdyne and the AFRL. Boost-glide hypersonic weapons are pushed high into the atmosphere by a booster rocket, much like an intercontinental ballistic missile. Then, the weapon glides back to earth at hypersonic speeds, until colliding with its target.

Scramjets need a booster to accelerate to Mach 5 – the definition of hypersonic speed – at which point the engine ignites and propels its cruise missile body on sustained hypersonic flight. Because scramjet engines have to ingest and then ignite air travelling at high speeds, the challenge of making the technology work has been compared to lighting a match in a hurricane.

However, hypersonic cruise missiles powered by scramjets hold the promise of travelling closer to the ground. That would mean an adversary would not see the missile until it rounded the curvature of the Earth. By that point, given the hypersonic velocity of the weapon, it would be too late to shoot down.

“Aerojet Rocketdyne joins the record-setting team for the highest thrust produced by an air-breathing scramjet hypersonic engine,” says Paul Kennedy, AFRL programme manager. “Tests were conducted across a range of Mach numbers demonstrating performance to accelerate a vehicle 10 [times] the size of the X-51, at hypersonic speeds.”

The X-51A Waverider was a pioneering hypersonic vehicle powered by a scramjet, also produced by Aerojet Rocketdyne, that first took flight in 2010.

As boost-glide and air-breathing engines are making progress, the USAF is also refining the end of a hypersonic missile’s journey: its warhead.

That not only creates a navigation and targeting problem, but a detonation timing challenge, too. 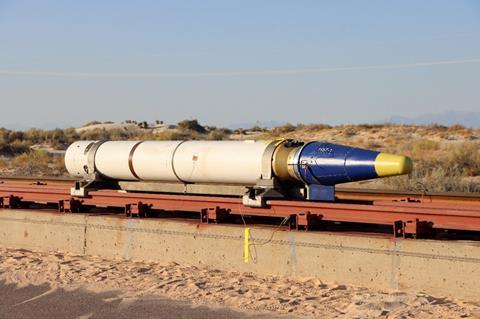 Apparently aiming to solve the timing challenge, the AFRL says its recent sled tests show progress in detonating a warhead at “high speeds”. The research laboratory does not disclose the velocity of the warhead when it was detonated in ground tests.

“The sled test was a success with the warhead reaching high speeds and detonating at the exact moment intended,” says the AFRL.

“A rocket sled accelerated the warhead at high speeds and an electric circuit at the end of the track detonated the warhead precisely on target,” says Michael Denigan, principal investigator for the technology demonstration. “This demonstration gives our industry partners confidence that this smaller warhead solution will perform well in actual flight.”

The AFRL says the warhead is also less than half the weight of a similar conventional munition, while “maintaining the same effectiveness”.

The USAF is also researching using hypersonic missiles without explosive warheads. Because the weapon’s mass is moving many times the speed of sound, it ought be able to destroy targets on impact due solely to its momentum. However, that type of hypersonic missile requires a high level of precision aim.