The contracts are part of the Southern Cross Integrated Flight Research Experiment (SCIFiRE), a joint project between the US Department of Defense (DoD) and the Australian Department of Defence that was announced in November 2020. 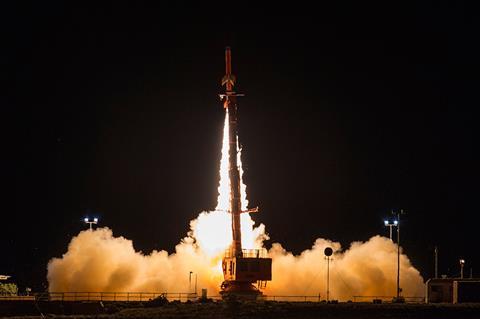 Flight test of HIFiRE 4, a forerunner to the SCIFiRE effort

Boeing won a $39.7 million contract, Lockheed secured a $27.2 million agreement and Raytheon landed a $27.9 million deal to advance their concepts to a preliminary design review stage, the Pentagon says. Boeing and Lockheed are contracted to reach preliminary design review by the end of August 2022, while Raytheon is to reach that milestone by September 2022, the DoD says. The Pentagon disclosed the Boeing and Lockheed deals on 1 September and the Raytheon agreement on 3 September.

The USAF seeks a mature design for an air-breathing hypersonic missile that can be “air-launched from existing fighter and bomber aircraft”. The cruise missile is also to be “conventional”, meaning its warhead will not be nuclear.

“The SCIFiRE programme is based on more than 15 years of collaboration between Australia and the United States on science and technology research into hypersonic scramjets, rocket motors, sensors and advanced manufacturing materials,” says Canberra.

The SCIFiRE project is designed to leverage previous work from the Hypersonic International Flight Research Experimentation (HIFiRE) programme, another co-development effort between the USA and Australia that began in 2006. HIFiRE was a collaboration between NASA, the US Air Force Research Laboratory and Australia’s Defence Science and Technology Organisation to improve scramjet engine know-how.

Air-breathing hypersonic missiles are powered by scramjets, which use rocket boosters to accelerate to Mach 5 – the threshold of hypersonic speed. At that speed, an air-fuel mixture is ignited to sustain high-speed flight. Because scramjet-powered missiles burn oxygen from the atmosphere, instead of carrying it, the type could be small enough to be carried on fighters.

Specifically, SCIFiRE is intended to be carried by tactical fighters such as the Boeing F/A-18F Super Hornet and EA-18G Growler and Lockheed’s F-35A, and by Boeing P-8A Poseidon maritime patrol aircraft, says the Australian DoD.