Boeing has resurrected and is showing off its Powered JDAM concept believing that the US Air Force (USAF) is keen to buy low-cost cruise missiles.

The company has increased development work on the concept within the last 18 months, it says at the Air Force Association Air Warfare Symposium in Orlando, Florida on 28 February. The project was originally begun about eight years ago, but had been put on the back burner due to lukewarm interest from the service. 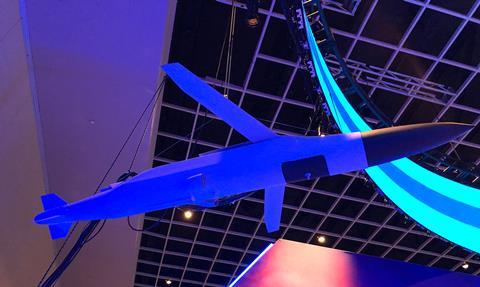 The idea has new life now that the USAF is pursuing glide bomb swarms, such as the Air Force Research Laboratory’s Golden Horde project. It is also relevant because of the service’s desire for long-range strike options.

The Powered JDAM shares a lot of similarities to the glide variant of the JDAM. The Powered JDAM uses a derivative wing kit that is sized between the 2,000lb-class and 500lb-class glider JDAM wing kits. The warhead on the cruise missile variant is also a standard Mark 84 and it would use a regular Guidance Control Unit, says Kirkbride.

Boeing declines to disclose the cruise missile’s exact range, but says that it is comparable to more expensive and sophisticated cruise missiles, such as JASSM, which has a range of 200nm (370km).

The cruise missile also doesn’t have a stealthy shape and can’t fly below-radar, nap-of-the-earth routes like the JASSM. However, it could be networked with other weapons to autonomous attack a target in a swarm, similar to the Golden Horde programme’s effort to network gliding GBU-39B Small Diameter Bombs.

“We can take that exact same type of capability and put it into Powered JDAM,” says Kirkbride.

Ultimately, the idea behind the Powered JDAM is to overwhelm and bankrupt an enemy.

“No matter what the enemy tries to shoot down that [cruise missile] with, they’re going to lose the battlefield calculus equation,” says Jim Leary, global sales and marketing for weapons with Boeing. “They’re going to have to tap some kind of exquisite [and expensive] missile to shoot something like that down. It’s going to cost a lot more.”