The Brazilian air force plans to cut its order of 28 examples of the Embraer KC-390 Millennium transport due to the negative impact of the coronavirus pandemic on Brasilia’s budget.

The service has not said by how much its order will be reduced, but stated on 27 May that it aims to have Embraer hold production at two aircraft per year. Embraer produced two KC-390s per year in 2019 and 2020, but with the addition of two new customers, Hungary and Portugal, following the Brazilian air force’s initial order, it was expected to ramp up production in the 2020s. 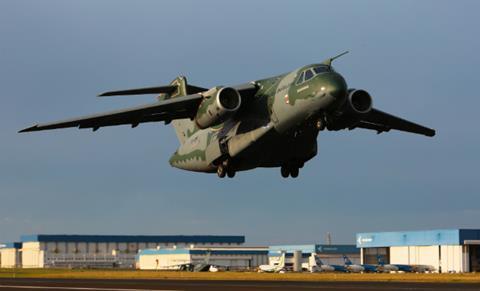 Despite being the launch customer for the KC-390, the Brazilian air force says budgets constraints are forcing it to reduce its order for the transport

“The health crisis that the world has been facing since the end of 2019 has had an impact on the global economic situation, with impacts also on the Brazilian fiscal and budget situation,” says the Brazilian air force. “As a result, resources allocated to the defence sector have been subject to restrictions that directly limit the strategic projects of the armed forces.”

The service adds that the 28 aircraft it has on order have “proven to be superior to the force’s budget reality, both for acquisition and for logistical support over time”.

Embraer has delivered four examples of the KC-390 to the Brazilian air force so far. The service is the launch customer for the transport aircraft.

The air force says its high command started budget analysis and operations studies in 2019 – right before the coronavirus pandemic started – and determined based on “legal provisions in force” that it needed to enter a contractual negotiation with Embraer.

“The objective will be to reduce the total number of aircraft delivered, based on the current contract, and seek a production rate of two aircraft per year, factors considered adequate considering the operational, logistical and financial aspects,” the service says.

Embraer acknowledged the Brazilian air force’s reduced order. It says the “reduction has no relation with Embraer’s capacity to produce and deliver the aircraft”.

In addition to the aircraft ordered by Brasilia, Embraer has five aircraft on order from the Portuguese air force and two aircraft from the Hungarian air force. It is also trying to convert 33 letters of intent into firm orders for the air forces of Argentina, Chile, Colombia and the Czech Republic, plus aviation services firm SkyTech, according to Cirium fleets data.

The sales prospects of the KC-390 were diminished in 2020 when Embraer’s joint venture agreement with Boeing to sell the aircraft worldwide collapsed. Embraer has maintained that it will be able to handle the transport’s global sales without Boeing and has numerous international sales campaigns ongoing.

The Brazilian air force notes that it is still committed to developing new aircraft with Embraer, pointing to its continued support for studying the design of new unmanned air vehicles (UAVs) and the conceptual development of a new light transport aircraft.

Last November, Embraer announced that is working with the service to develop a turbo-electric hybrid Short Take Off Utility Transport (known as STOUT) that is intended to replace the Brazilian air force’s Embraer EMB-110 Bandeirante (designated C-95A) and EMB-120 Brasilia (C-97) fleets. In April, the company said that it is jointly studying the development of an “advanced” UAV with the air force.

The article was updated on 2 June with comments from Embraer