The US Air Force’s average funding level in recent years is too little to replace, on a one-for-one basis, aging aircraft with new aircraft in the coming decades.

That’s according to research by the Congressional Budget Office, which notes that costly-to-replace Lockheed Martin F-16C/D and Boeing F-15C/D fighters, F-15E multirole fighters, Lockheed Martin C-130 cargo aircraft, and Rockwell B-1B bombers are nearing the end of their service life.

Replacement costs would be lower if the Air Force decided to extend the service life of some aircraft or if the costs of procuring some aircraft were lower than CBO projects, the agency notes. 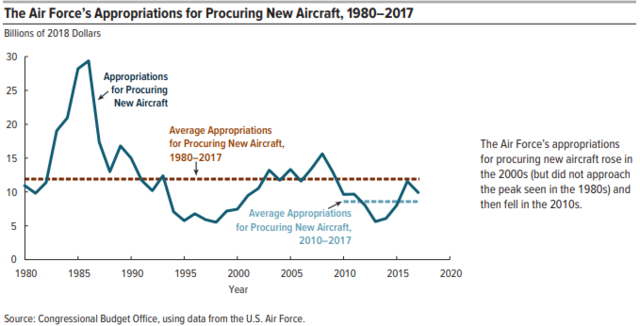 The USAF’s fleet includes about 2,000 fighter and attack jets; 150 long-range bombers; 1,100 airlift, cargo, and utility planes; 450 tankers; 500 reconnaissance and electronic warfare aircraft; 1,200 trainer planes; and 150 helicopters and tiltrotors, according to the CBO’s accounting.

The largest share of the fleet is 26 – 30 years old; those aircraft entered service in the late 1980s and early 1990s, funded by the defense buildup of the 1980s, says the CBO. The service’s annual appropriations for procuring new aircraft peaked in 1986 at about $29 billion, but then trended downward until the late 1990s.

Those aging Cold War-era aircraft could prove expensive to replace. The largest costs for the USAF are projected to be for replacing aircraft ages 26 - 30 years old, and those that are 31 - 35 years old, such as the B-1Bs, F-15C/Ds, and F-16C/D. Another group of aircraft with big replacement costs are those more than 55 years old, which mostly includes the Boeing KC-135 aerial refueling tankers and B-52 bombers.