The US Department of Defense (DoD) believes China will at least double its nuclear warhead stockpile in the next decade.

Beijing currently maintains a count of nuclear weapons in the low 200s, according to the DoD’s 2020 “Military and Security Developments Involving the People’s Republic of China” report to the US Congress, which was released on 1 September. 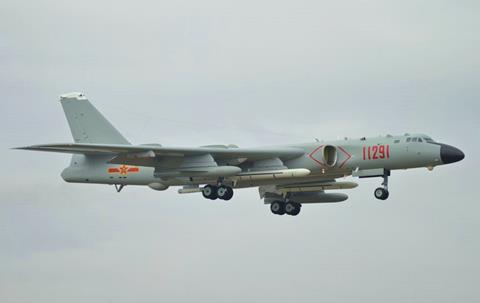 The increase in the number of nuclear warheads comes as the country is developing and planning to field more means of launching the weapons.

“In October 2019, China signaled the return of the airborne leg of its nuclear triad after the [People’s Liberation Army Air Force] publicly revealed the H-6N as its first nuclear-capable air-to-air refuellable bomber,” says the report. “The [People’s Republic of China] is developing new intercontinental ballistic missiles that will significantly improve its nuclear-capable missile forces and will require increased nuclear warhead production, partially due to the introduction of multiple independently targetable reentry vehicle capabilities.”

The number of land-based intercontinental ballistic missiles capable of reaching the USA is projected to grow to about 200 examples over the next five years, the report adds.

China also plans to have more options for air-launching its nuclear weapons.

“To date, [People’s Republic of China] officials have identified both the H-6N bomber and China’s future strategic stealth bomber as dual-capable delivery platforms,” says the report. “The [People’s Liberation Army Air Force] is upgrading its aircraft with two new [air-launched ballistic missiles], one of which may include a nuclear payload. Its deployment and integration would provide China for the first time with a viable nuclear triad of delivery systems dispersed across land, sea, and air forces.”

China’s in-development stealth bomber is the Xian H-20. The DoD report does not say when it thinks the flying-wing aircraft will be introduced into service, but points out “commentators speculate that it may take more than a decade to develop this type of advanced bomber”.

The Pentagon also notes that bomber range is being increased by China’s growing fleet of in-flight refuelling tankers, including the Xian H-6U, a tanker variant of the H-6 bomber, and a handful of Ilyushin Il-78 tankers bought from Ukraine. The country is also developing a tanker variant of the Xian Y-20 heavy-lift transport which will improve its “ability to operate beyond the First Island Chain from bases in mainland China”.