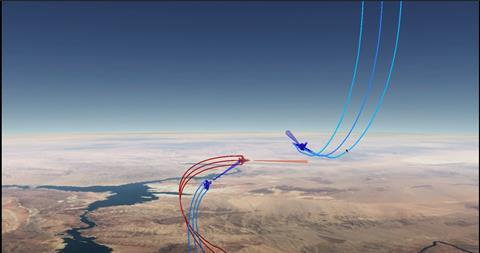 “These new engagements represent an important step in building trust in the algorithms since they allow us to assess how the [artificially intelligent] agents handle clear avenue of fire restrictions set up to prevent fratricide,” says Colonel Dan Javorsek, programme manager in DARPA’s Strategic Technology Office. “This is exceedingly important when operating with offensive weapons in a dynamic and confusing environment that includes a manned fighter, and also affords the opportunity to increase the complexity and teaming associated with manoeuvring two aircraft in relation to an adversary.”

“To begin capturing this trust data, test pilots have flown several flights in an [Aero Vodochody] L-29 jet trainer at the University of Iowa Technology Institute’s Operator Performance Laboratory,” says DARPA. “The two-seat jet is outfitted with sensors in the cockpit to measure pilot physiological responses, giving researchers clues as to whether the pilot is trusting the [artificial intelligence] or not.”

For safety reasons, the L-29 is actually flown from the front cockpit seat by a “human servo actuator”, a human pilot that is reading flight instructions generated by an artificially intelligent program and then executing those manoeuvres. “To the evaluator pilot in the backseat, it appears as if the [artificial intelligence program] is performing the aircraft manoeuvres,” says DARPA.

“We’ve started looking at measurement techniques to see where the evaluation pilot’s head is pointing, as well as where their eyes are looking around the cockpit,” Javorsek says. “This enables us to see how much the pilot is checking on the autonomy by looking outside the window, and comparing that to how much time they spend on their battle management task.”

DARPA plans to transition its dogfighting artificial intelligence algorithms from its simulations to subscale aircraft demonstration in late 2021.

The ACE programme will culminate in a full-scale, artificial intelligence-controlled L-39 jet flying in team dogfight trials in late 2023 and 2024. DARPA is developing aero performance models of the L-39 and contractor Calspan has begun modifying an initial aircraft.