The aircraft used underwing refuelling pods and a hose and drogue system to pass aviation gas from one transport to another, said the company on 1 April. 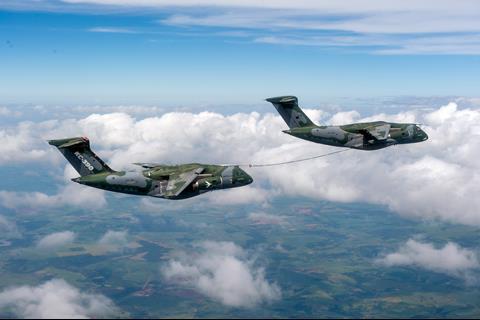 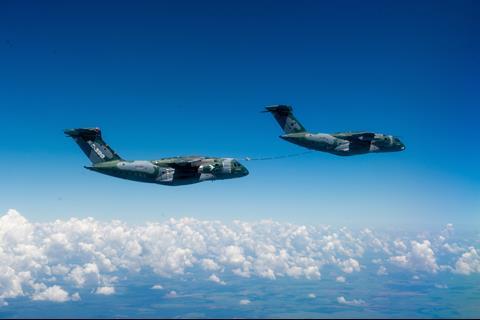 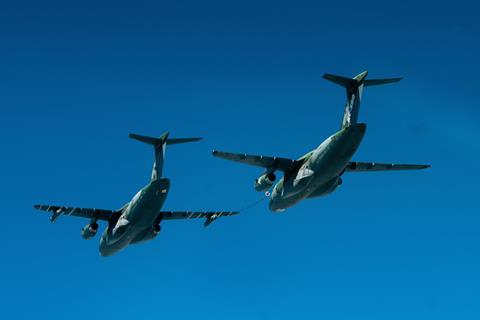 The demonstrations were conducted at Embraer’s Gaviao Peixoto site in southeast Brazil and included pilots and engineers from the Brazilian air force.

The Brazilian air force is operating four examples of the KC-390, which have accumulated more than 2,500 flight hours. The country has used the aircraft repeatedly over the past 12 months to transport medical supplies for fighting the coronavirus pandemic in Brazil.

In February, the Brazilian air force sent one of its KC-390s to Fairbanks, Alaska, for cold weather testing.

Embraer has 33 letters of intent for the KC-390 that it is working to turn into firm orders. Argentina, Chile, Colombia, the Czech Republic and aviation services firm SkyTech have signed letters of intent.

The company was banking on a joint venture with Boeing to increase sales of the aircraft, possibly by manufacturing the transport in the USA and selling it to US military services, as well as to other international customers via the US Foreign Military Sales process. However, as the 737 Max crisis stretched into 2020 and the coronavirus hit commercial aircraft sales more broadly, Boeing decided to end its relationship with Embraer. The Brazilian company has since said it is open to new partnerships for the KC-390, although no new tie-ups have emerged.