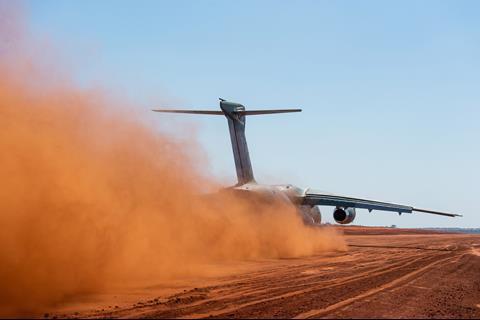 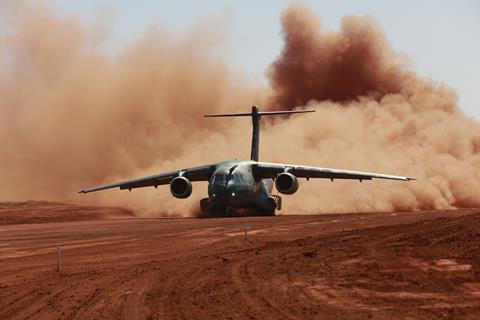 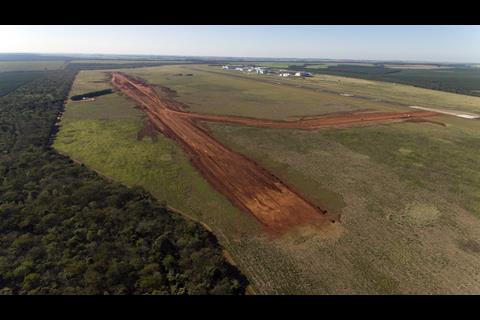 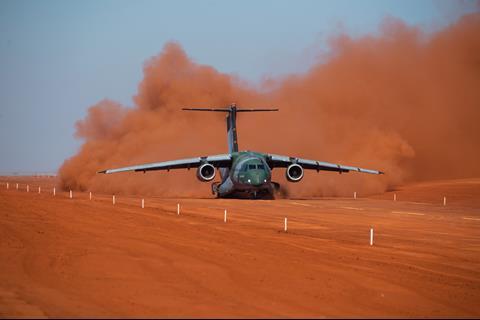 Embraer has started flight testing the KC-390 Millennium on an unpaved runway.

An 1,800m (5,905ft) dirt runway at the company’s Gaviao Peixoto facilities in southern Brazil will be used over the next several weeks to assess and analyse the performance of the tactical transport, Embraer said on Twitter on 23 July.

Embraer has continued to put the KC-390 through a variety of certification-related tests in recent months, including cold weather testing in Alaska and an in-flight refuelling qualification.

The KC-390 is designed to operate from rough runways, including semi-prepared and damaged airstrips, with twin turbines that are positioned forward on a high wing, a configuration intended to stop the engines from sucking in ground debris. The company also says its airframe is damage tolerant.

“The C-390 Millennium has excellent ground manoeuvrability and can operate on airfields with limited space for parking or manoeuvring and no ground facilities,” says Embraer. “The C-390 Millennium can normally operate from a 4,000ft semi-prepared soft airstrip (compacted sand-clay soils) carrying 12 metric tonnes of cargo to a distance of 500nm [925km].”

Embraer has pitched the KC-390 as a multi-mission aircraft capable of handling cargo transport, in-flight refuelling, cargo air drops, deploying paratroopers, search and rescue, medical evacuation and aerial firefighting. The company says the aircraft can be reconfigured for all missions in 3h or less. Embraer is also promoting the jet as a civilian cargo aircraft, dubbed the C-390.

Continued testing of the KC-390 comes as the Brazilian air force announced plans in May to cut its order of 28 examples of the aircraft due to the negative impact of the coronavirus pandemic on Brasilia’s budget. The service has not said by how much its order will be reduced, but stated that it aims to have Embraer hold production at two aircraft per year – the same production pace as in 2019 and 2020.

Production of the KC-390 was expected to ramp up to fulfil outstanding orders from the Brazilian air force, as well as five aircraft from the Portuguese air force and two for the Hungarian air force. Embraer is also trying to convert 33 letters of intent into firm orders for the air forces of Argentina, Chile, Colombia and the Czech Republic, plus aviation services firm SkyTech, according to Cirium fleets data.

The Brazilian air force has four examples of the KC-390 in service.