The F-15C used Lockheed Martin’s Legion Pod IRST block 1.5 system for the AMRAAM test, which happened on 5 August, the service said on 10 August. 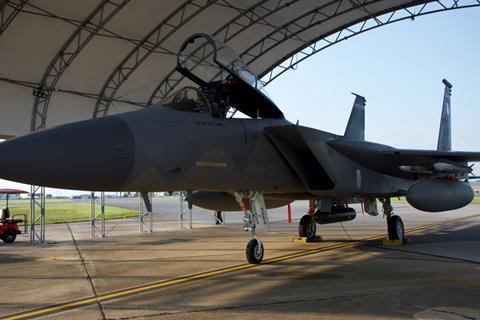 IRST systems are being evaluated as a means to guide air-to-air missiles to stealth aircraft, which are designed to be difficult to target using radar alone. IRST systems use passive sensors, meaning the equipment does not broadcast signals that can reveal an aircraft’s location.

As part of the recent test, which took place at Eglin AFB in Florida, the Legion Pod IRST system worked in coordination with Raytheon’s APG-63v3 electronically scanned array radar to transmit the QF-16 drone’s location to the AIM-120 missile, says the USAF. Boeing sells QF-16s, which are Lockheed Martin F-16s modified to be remotely piloted.

“This successful live missile test is significant because an F-15 equipped with an IRST-cued AIM-120 allows us to achieve detection, tracking, targeting, weapons employment and verification of an intercept without being dependent upon radar energy,” says Major Brian Davis, 85th Test and Evaluation Squadron chief of air-to-air weapons and tactics. “It’s also not susceptible to radio frequency jamming or a target’s low-observable design.”

In July 2020, the USAF demonstrated an IRST Legion Pod guiding the short-range Raytheon AIM-9X Sidewinder missile, also fired from an F-15C, to a target drone.

The USAF wants IRST sensors across its combat fleet to counter the emergence of stealth aircraft within the air forces of China and Russia. As part of that effort, the service’s F-16s are also to be equipped with Legion Pods. Lockheed F-35As come equipped with IRST sensors.