The test on 7 November was conducted by the US Air Force 388th Fighter Wing’s 34th Fighter Squadron, which is stationed at Hill AFB, Utah. The GBU-49 is made by Raytheon. It is a converted “dumb” bomb that uses a laser and GPS to be guided to its target. The precision weapon can be used in a variety of weather conditions, against moving or stationary targets.

“Like any new weapon, what we learned, and what we will learn as we continue to train with the GBU-49, will directly impact our tactics and will make the F-35A even more lethal,” says Lt Col Matthew Johnston. 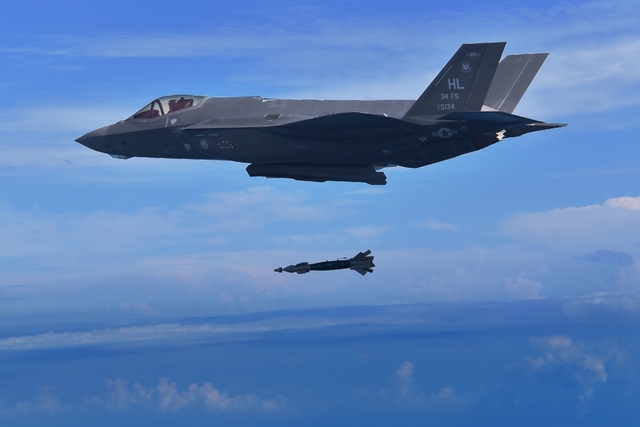 USAF F-35A pilots had been training to drop the GBU-49 in flight simulators at Hill AFB, but plan to use continued live training to refine their tactics and techniques. Weapons crews, maintainers, and pilots were assessed on their ability to build, load, and drop the weapons during the combat training, says the service.

The USAF says further training on the Utah Test and Training Range with live and inert GBU-49s will begin soon. Hill AFB is scheduled to be home to three F-35 fighter squadrons with a total of 78 aircraft by the end of 2019, says the service.

The first combat training drop of the GBU-49 from the F-35A comes as the Department of Defense granted Lockheed Martin an $83.1 million contract on 15 November to make the aircraft dual capable – able to launch conventional or nuclear weapons – by February 2024.