A US Marine Corps F-35B stealth fighter has dropped a Raytheon StormBreaker precision glide bomb for the first time.

After the Lockheed Martin F-35B released the weapon, a nearby Boeing F/A-18F Super Hornet monitored the bomb using a “common network” and the munition successfully impacted its target, Raytheon says on 29 November. 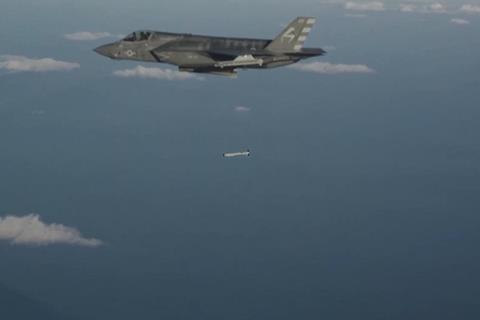 In addition to testing safe release of the bomb, the demonstration, which took place at Naval Air Station Patuxent River, Maryland was intended to show that the weapon could be networked.

The Department of Defense is interested in networking bombs and missiles so that the weapons can autonomously coordinate attacks. A weapon that can communicate might also be able to be guided to its target by sensors on multiple aircraft, perhaps giving the munition more precise coordinates or backup information if its data link with one aircraft is lost.

The StormBreaker is a precision guided bomb with a pair of wings that allow it to glide up to 35nm (64km) after being released from an aircraft. The ability of the weapon to glide to its target is intended to help keep the fighter out of reach of an adversary’s weapons, for instance, surface-to-air missiles.

The 93kg (204lb) bomb gets its name from its ability to fly through bad weather, darkness, smoke or dust. It is able to hit a moving target despite poor visibility by relying on an infrared sensor, millimetre-wave radar and semi-active laser, as well as GPS and inertial navigation system guidance, says Raytheon. 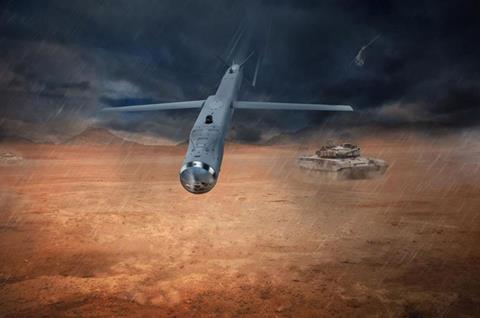 The StormBreaker smart bomb can see through dust, says Raytheon

“The weapon’s operational flexibility increases the F-35’s capability and capacity, and it helps limit the time our warfighters spend in harm’s way,” says Alison Howlett, StormBreaker programme director at Raytheon Missiles & Defense. “StormBreaker allows pilots to hit moving targets in adverse weather conditions, which our adversaries have relied on in the past to avoid detection.”

In 2020, the US Air Force approved the StormBreaker for operational use aboard the Boeing F-15E Strike Eagle.