US Marine Corps (USMC) fighter attack squadron 314, based at MCAS Miramar in California, has become the first within the service to declare that its Lockheed Martin F-35C stealth fighters have reached full operational capability.

While the service plans to buy 353 examples of the short take-off and vertical landing (STOVL) F-35B for operations atop amphibious assault ships, it also is planning to acquire 67 carrier-based F-35Cs that will operate aboard the US Navy’s nuclear-powered aircraft carriers. 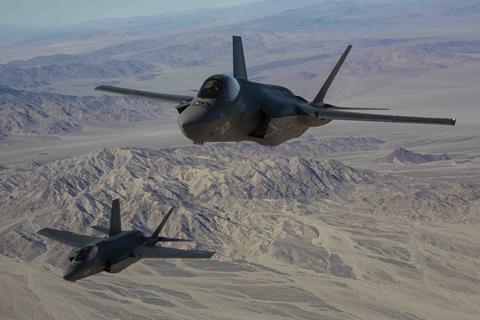 “Many hours were spent maintaining aircraft, launching and recovering aircraft in Miramar, at other military facilities, and aboard the ship to conduct the training required to meet these goals,” Major Derek Heinz, fighter attack squadron 314 operations officer, said on 1 July. “The marines of [fighter attack squadron 314] have gained confidence in fighting with this aircraft and feel confident we can do so in combat if called upon.”

Declaration of full operational capability means that fighter attack squadron 314 is fully prepared and equipped to deploy the F-35C aboard USN aircraft carriers, the service says.

The F-35B is the mainstay of the USMC’s fleet. The STOVL stealth fighter is designed to fly from amphibious assault ships; multi-purpose miniature aircraft carriers that also carry helicopters and amphibious landing craft for shore assaults.

Nonetheless, F-35Cs are more capable than the F-35B in range and payload. Those abilities are seen as vital for countering the Chinese military across the vast distances of the Western Pacific.

Deploying USMC F-35Cs aboard nuclear aircraft carriers, operated by its parent service the USN, is seen as a way to increase and maintain the reach of the service’s airpower.

“The F-35C provides critical flexibility and persistence operating from conventional aircraft carriers or land bases,” the service says in its 2019 Aviation Plan.

The need for dedicated USMC fighter squadrons has been a pillar of the service’s operating doctrine since the Second World War, when in 1942 the USN withdrew its aircraft carriers during the invasion of Guadalcanal leaving marines on the island without air cover. In part, that is what justifies the existence of Marine Corps Aviation; sometimes jokingly described as ”the navy’s army’s air force”.

The USMC plans to deploy F-35Cs from fighter attack squadron 314 as part of a carrier strike group in 2022, it says.