Ghana’s president is to pursue an inquiry into allegations of bribery during the military’s acquisition of Airbus tactical transport aircraft, detailed in UK court documents following a corruption probe into the airframer.

Five counts of failing to prevent bribery, aimed at Airbus after a UK Serious Fraud Office investigation, mainly centre on activities relating to commercial aircraft orders in the Asia-Pacific region.

But one count focuses on two campaigns to supply Airbus Military C295s to Ghana. Two aircraft were ordered in August 2011 and a third, after an aborted lease proposal, in March 2015.

It alleges that Airbus engaged a close relative of a high-ranking elected Ghanaian government official as a business partner for the proposed C295 sale, and that this relationship was known within Airbus.

Commission payments of around €5 million – intended to reward improper favour – were made, or promised, to the business partner, according to a UK High Court statement on the case disclosed on 31 January.

“False documentation was created by, or with the agreement of, Airbus employees in order to support and disguise these payments,” it adds. 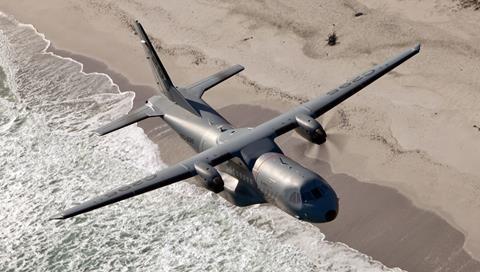 Three C295s are at the heart of the Ghanaian case

Ghanaian president Nana Akufo-Addo has “taken notice” of the details of the deferred prosecution agreement with Airbus and the “implications”, says the country’s communications directorate.

It has not disclosed the identity of the senior Ghanaian government official highlighted by the court as a key decision-maker in respect of the aircraft sales.

But the president has referred the situation to the special prosecutor’s office with instructions to collaborate with UK authorities and conduct a “prompt inquiry”.

This inquiry should “determine the complicity or otherwise of any Ghanaian government official, past or present, involved in the said scandal” and take any necessary legal action, the directorate adds.