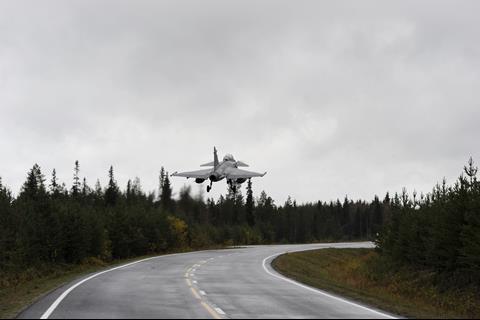 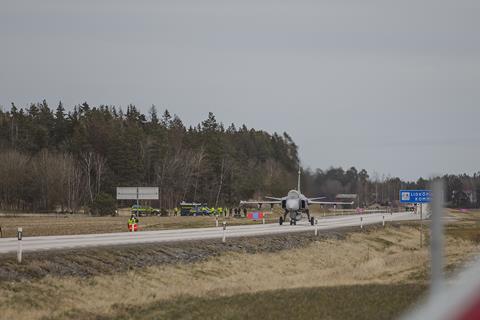 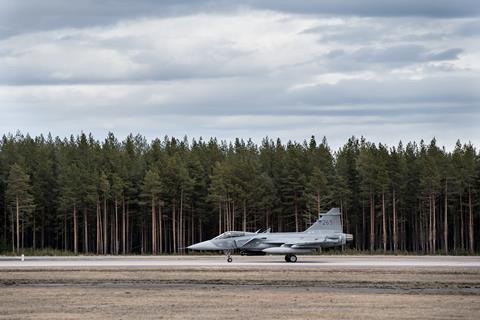 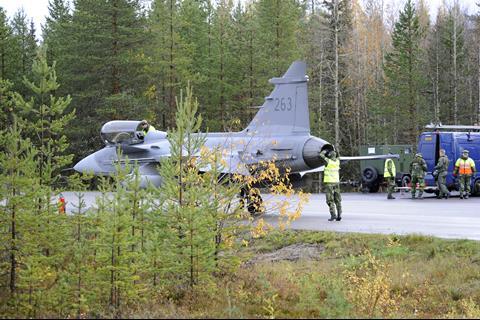 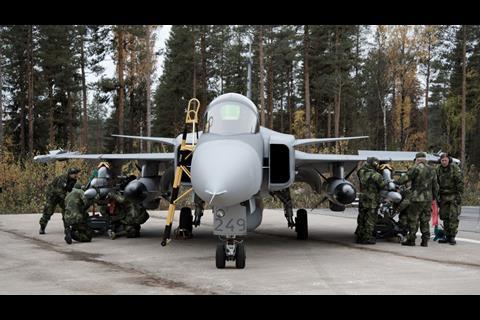 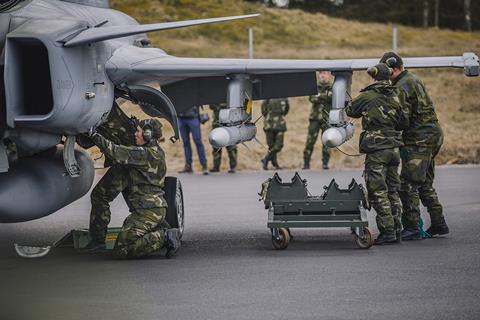 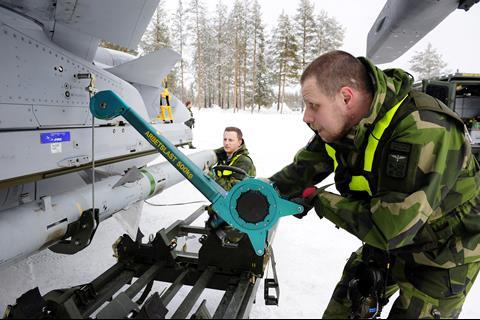 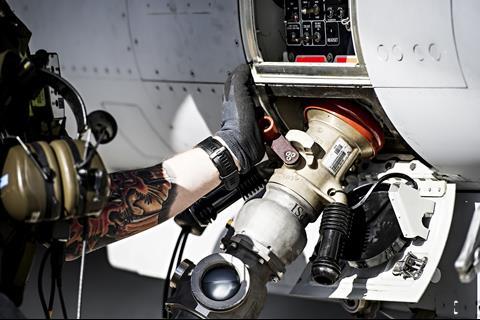 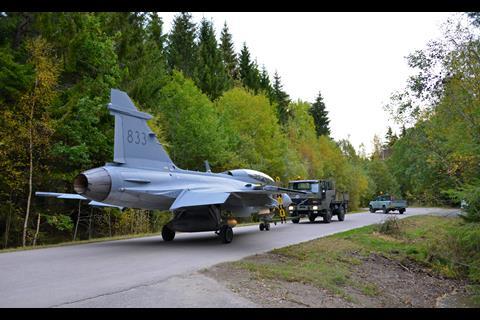 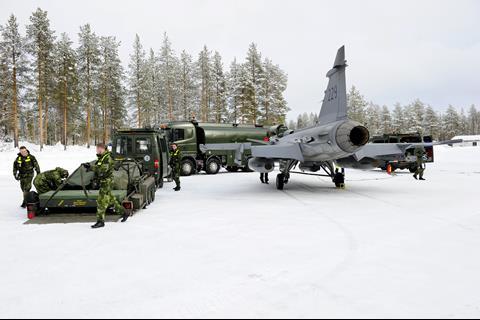 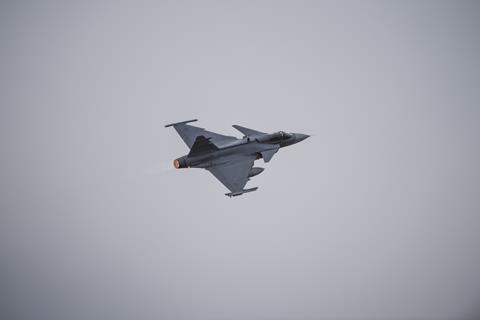 Facing the Soviet threat during the Cold War, the Swedish air force devised an air basing strategy that dispersed fighters throughout its territory, making it difficult for Moscow to destroy all of its fleet on the ground in a surprise attack.

The Bas 90 system, which often nestled air strips amid forests and used highways as back-up runways, was partially dismantled after the end of the Cold War. However, in recent years the ideas behind the system are receiving renewed focus as Stockholm faces a resurgent Russia. 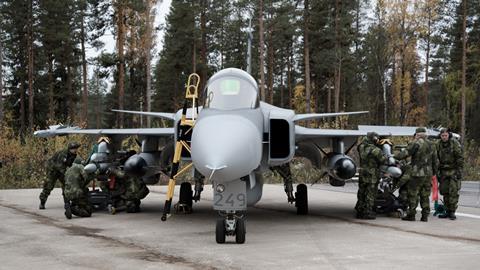 Dispersed basing also is getting interest from the US Air Force (USAF), as the service looks for ways to avoid its Pacific Air Forces fleet being destroyed on the tarmac by long-range precision cruise and ballistic missiles launched from China. The strategy, called Agile Combat Employment, is also being employed by the service and its NATO allies in Europe in response to Russian hostility.

However, adapting the USAF’s premier combat aircraft, the highly complex Lockheed Martin F-35 and Lockheed F-22 stealth fighters, to dispersed operations is challenging. Both aircraft require extensive maintenance, repair and overhaul systems for sustained operations. That support system handles everything from stealth coating repair, software patches to engine overhaul. It’s not easy – nor was it originally designed – to pick up and relocate to a remote air base.

In contrast, the Swedes intended from the very beginning to have fighters operating from austere air bases. At the end of the Cold War this greatly influenced the development and production of the Saab JAS 39 Gripen.

To understand the design of the Gripen, Saab argues that the nature of Bas 90 bases and the Swedish military need to be understood.

Bas 90 bases are designed to survive enemy attack by having flightlines and runways that are positioned far apart, often separated and hidden by woods. Aircraft also have the option to use several back-up runways, sometimes reinforced highways adjacent to the main airstrip.

“Attacking aircraft on the ground is made more difficult by dispersing individual flightline positions over large areas and with long distances between each position,” explains a 1986 documentary produced by the Swedish military. “The number of flightline positions in a base is enough to vary aircraft positioning over time.”

Because Bas 90 bases are spread out the Swedish military presumed that it would be “very cost-inefficient” for the Soviet Union to totally destroy the base from the air. 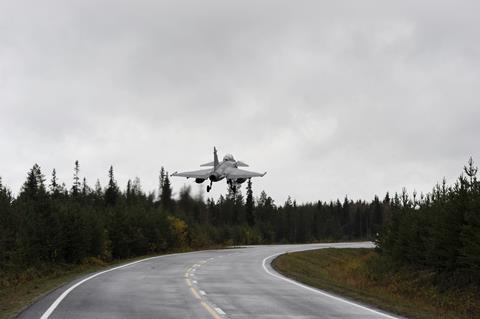 If an air strip is damaged by a bomb, the latest Gripen E can land in 600m (1,970ft) and take off in 500m, says Saab. The landing strip only needs to be 16m wide. That short take-off and landing ability also allows the fighter to fly from taxiways, small civil airfields or highways.

To land on short airstrips, but also to increase manoeuvrability, the Gripen was given a canard. The canard allows the fighter to increase its angle of attack and create more lift at slower speeds during landing.

“You also do what we call a direct landing, which is similar to what the US Navy does on carriers,” says Eddy de la Motte, head of the business unit for Saab Gripen E/F. “You don’t have a flare. You basically fly the aircraft into the ground. You have to be able to sustain higher vertical velocities than a normal land-based aircraft.”

Once the aircraft has touched down it needs to be stopped quickly. On the predecessor Saab 37 Viggen a thrust reverser was used to slow and halt the aircraft. “It’s a very exciting system to use,” says Mikael Olsson, head of flight testing for Saab and a former Viggen pilot.

Saab decided to forgo the thrust reverser on the Gripen, instead using the canard and wheel brakes to stop quickly. “We use the canard and the wing rudders to create aerodynamic downforce to make the brakes more effective,” says de la Motte. “It’s like what you do on Formula 1 or NASCAR.”

Gripens taxi using their own power to flightline positions for maintenance, refuelling and rearming. “You can actually make a U-turn on the road if necessary,” says de la Motte. 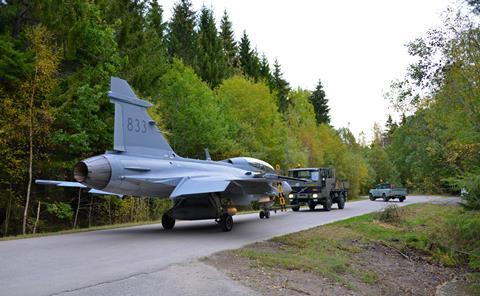 Instead of aircraft being serviced at fixed repair depots, mobile maintenance crews, driving vans and military trucks, bring fuel, munitions and parts to the aircraft’s position. Refuelling and rearming – including reloading the gun and attaching air-to-air missiles – can be done in less than 10min with one enlisted technician and five conscript mechanics, claims Saab. Maintenance equipment fits in a single small shipping container.

“In terms of a turnaround – landing, doing refuelling, rearming and taking off again – how do you minimise that time?” says de la Motte. “Obviously, you try to make the aircraft self-contained. For instance, we use an auxiliary power unit, which was quite unique for the military fighter aircraft of that generation. One reason why we did that was to eliminate lots of ground support equipment.”

To eliminate additional ground equipment, the aircraft handles many of its start-up systems and diagnostic checks internally. “The aircraft tells the ground personnel whether it has a problem or a potential problem,” says de la Motte.

Weapon system checks are also streamlined. “We don’t have to go to specific positions close to the runway and take out the safety pins,” says de la Motte. “We have a master arm switch instead.”

Maintenance areas of the jet must also be accessible with winter gloves on as much service work is performed outdoors in the cold of Nordic winters. Access panels are opened and closed with push button latches. The service panel and refuelling hatch are located in the same area to save the crew walking around time.

“It was a must that it was easy for a conscript with only one year of training and education,” says Olsson. “For example, changing an engine in the woods or on the bases, the requirements were you should do that in an hour.”

The engine can be detached from the airframe by removing just a few bolts, disconnecting the fuel, hydraulic lines and gearbox, and lowering it using hand-cranked fishing rod-like winches, a tool that also can be used to hoist missiles into their pylons. “That kind of thinking has dominated the design process from the beginning,” says de la Motte. 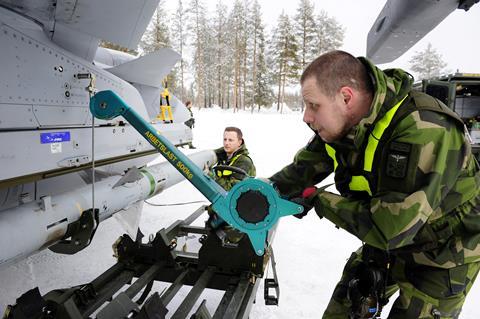 When refuelling and rearmament is complete, the ground crew slips back into forest encampments. Personnel and equipment are only positioned near runways momentarily so as to avoid being killed or destroyed during an attack.

When the Berlin Wall fell and the Warsaw Pact dissolved at the end of the Cold War, Stockholm partially walked away from its dispersed air basing strategy. Instead the country embraced international co-operation with neighboring countries, such as Finland and members of the NATO alliance. For example, in May 2020, the US Air Force for the first time flew Boeing B-1 bombers over Sweden as part of close-air support training with the Swedish air force’s Gripen fleet.

Still, while international cooperation has increased, in recent years the focus on dispersed operations has been renewed, with Sweden operating a mix of both defensive strategies.

“Design requirements, the requirements in terms of dispersed basing, they have stayed the same,” says de la Motte. “They haven’t been relaxed or changed.”