India’s long-delayed Tejas programme has successfully demonstrated the ability of a specially modified Mk1 example of the fighter to undergo air-to-air refuelling behind an Ilyushin Il-78MKI tanker.

For the demonstration, limited series production aircraft LSP-8 took-off from Gwalior air base in western India, before meeting up with an Il-78MKI operating from Agra air base. The fighter used a Cobham-supplied refuelling probe to connect with the tanker's hose-and-drogue system for a series of "dry" contacts, before a first fuel transfer took place on 10 September. 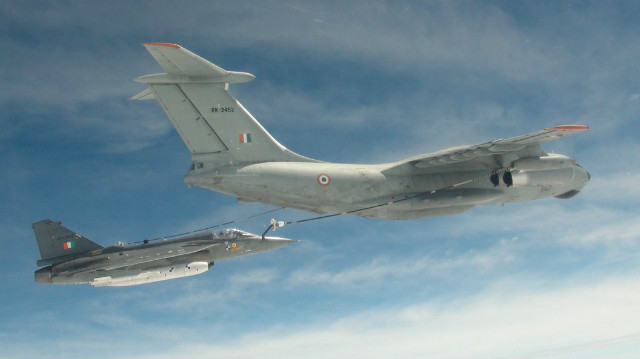 Aircraft LSP-8 had also demonstrated a "hot refuelling" capability in February, when it was refuelled on the ground with its engine running.

Despite the recent milestone, the Aeronautical Development Agency's Tejas programme is running well behind schedule. As of 31 August, some 4,139 test flights had been completed since the single-engined type's debut in 2001.

The Tejas is currently scheduled to secure final operational clearance (FOC) from the Indian air force in December, although this appears likely to slip until late 2019.

Aircraft manufacturer Hindustan Aeronautics (HAL) has so far delivered only nine Tejas Mk1s under a March 2006 order for 20 examples in an initial operational clearance standard. Deliveries were originally due to have been completed by December 2011, but seven single-seat fighters and all four two-seat trainers covered by the roughly $740 million deal have yet to be transferred.

HAL received a further contract in December 2010 to produce 20 FOC-standard aircraft, for delivery through 2016. However, the delayed receipt of operational clearance for the new variant means production has yet to begin.