Japan has been cleared by the US Department of State to buy 105 Lockheed Martin F-35 Lightning II stealth fighters as part of a package worth an estimated $23.1 billion.

The potential F-35 deal is the second largest foreign military sale approved by Washington in history, behind a $29.4 billion sale of Boeing F-15SA fighters and associated weapons to Saudi Arabia in 2010. 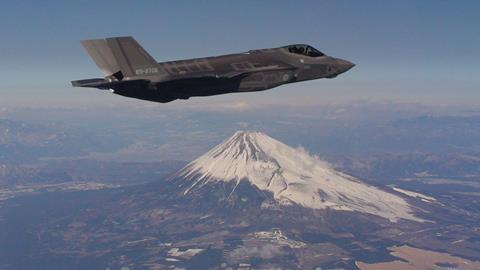 Tokyo requested 63 examples of the conventional take-off-and-landing variant F-35A and 42 of the short take-off and vertical landing F-35B, the US Defense Security Cooperation Agency (DSCA) says as part of a notice delivered to the US Congress on 9 July.

Also part of the sale are 110 Pratt & Whitney F135 engines, including five spares.

“This proposed sale will support the foreign policy goals and national security objectives of the United States by improving the security of a major ally that is a force for political stability and economic progress in the Asia-Pacific region,” says the DSCA. “It is vital to US national interest to assist Japan in developing and maintaining a strong and effective self-defence capability.”

Japan is ordering F-35Bs to populate its two Izumo-class vessels. Originally built as helicopter carriers, the Izumo and Kaga are to be retrofitted with reinforced and heat-resistant decks to handle the fixed-wing aircraft.

Though Japan has a Final Assembly and Check-Out facility for the F-35, aircraft from this prospective order are to be built in Fort Worth, Texas. There are no known offset agreements as part of the deal, says the DSCA.

The sale of F-35s to Japan is not finalised and still requires acceptance by Tokyo.