Receiver certification for the KC-46A started in April 2018 with the Lockheed Martin F-16, says Boeing. A joint US Air Force Boeing team has completed receiver tests with Boeing KC-135, Boeing C-17, Fairchild Republic A-10, KC-46, Boeing B-52 and Boeing F/A-18 aircraft since then.

The KC-46A and receiver aircraft flew at different airspeeds, altitudes and configurations to ensure compatibility and performance throughout the refueling envelope during the tests. The USAF and the Aerial Refueling Certification Agency are reviewing the recent test data and paperwork before officially certifying each aircraft. 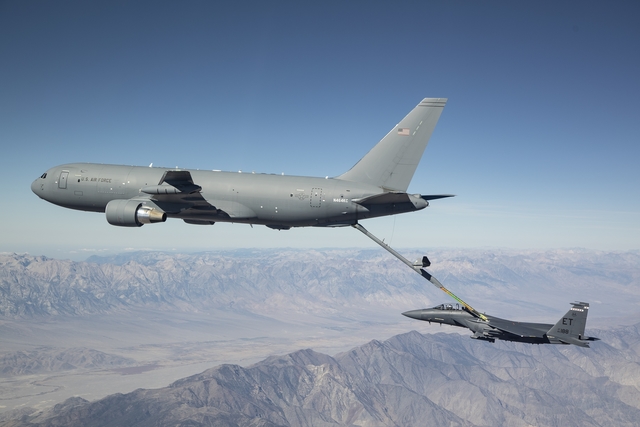 Over the course of testing, six KC-46A aircraft have completed more than 3,700 flight hours and supplied more than four million pounds of fuel in flight to receiver aircraft, according to Boeing.

Phase III receiver certification testing will be conducted by USAF at Edwards AFB in 2019, says Boeing. That testing will include additional receiver aircraft, though Boeing says it is unsure what aircraft would take part.

The KC-46A is derived from Boeing’s commercial 767 airframe. Boeing is currently on contract for the first 52 of an expected 179 tankers for the USAF.

The air tanker programme has been dogged for years by delays and cost overruns. Most recently, Boeing missed an October delivery deadline due to five unresolved category-1 deficiencies, including two related to sunlight glare on the camera that guides the aircraft’s refueling boom. The company now says the first aircraft will be delivered before the end of 2018.