Lockheed Martin says it would have lost more than $5 billion if it matched the winning bidder’s price on three recent defence contracts.

Speaking on a third-quarter earnings call on 23 October, chief executive Marillyn Hewson did not specify which contracts she was referring to, but rival Boeing recently triumphed in three contests: the US Air Force’s T-X jet trainer and Bell UH-1N utility helicopter replacement, as well as the US Navy’s MQ-25A Stingray carrier-based unmanned refueling aircraft. Boeing's selection for all three requirements was partly driven by low bids.

“We were disappointed, though, at not being selected for three large competitive bids this quarter. We believe our proposals represented outstanding technical offerings at our lowest possible pricing,” says Hewson.

“Had we matched the winning prices and been awarded the contracts, we estimate that we would have incurred cumulative losses across all three programs in excess of $5 billion, an outcome that we do not feel would have been in the best interest of our stockholders or our customers.”

In the wake of those contract losses, Lockheed Martin plans to reassess its bidding strategy, she adds.

“However, our objective will always be to position the corporation to perform with excellence for our customers while delivering outstanding value to our stockholders,” says Hewson.

That statement could be an indication that the company is unwilling to incur large upfront losses on programmes in the hopes of later profit if it jeopardises immediate shareholder returns. 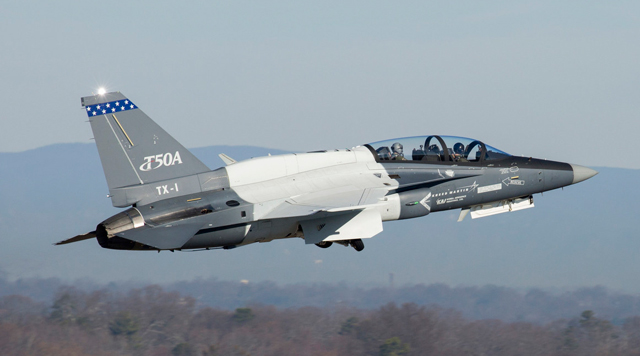 Lockheed Martin's T-50A, the company's bid for the T-X programme

The company expects sales to be around $53 billion for the full year, near the top of its guidance range and 6% higher than it reported in 2017. Annual operating profit now is expected to be $5.8 billion, about 13.4% above last year's figure.

Boeing won in rapid-fire succession three contracts worth $12.4 billion over the course of about 30 days across August and September, by aggressively bidding low prices and leveraging other company’s design work, analysts previously told FlightGlobal.

As a case in point, the firm's $9.2 billion T-X bid came in far below the USAF's initial estimate of $16.3 billion, and in part relied on aft fuselage design work performed by its partner, Saab. Boeing plans to carry out final assembly of the T-X trainer in St Louis, Missouri, and anticipates Saab moving aft fuselage production to an as-yet-unannounced location in the USA.

Despite those setbacks, Lockheed has had more success winning advanced research and development contracts for hypersonic vehicles, Hewson notes.

“In [the] Missiles and Fire Control [division], we were very excited to be awarded the $480 million Air-launched Rapid Response Weapon, or ARRW programme, to provide critical design review and production readiness support for new hypersonic weapon,” she says.

“The ARRW contract marks our third 2018 award in this emerging technological area, and when combined with the previously announced Tactical Boost Glide and Hypersonic Conventional Strike Weapon, or HCSW programme, brings the aggregate value of our 2018 hypersonic awards to over $1.5 billion.”