Five years from now, this might be the highlight of Bridget Lauderdale’s career. Or, it might be the bullet point on her resume that she wants to gloss over.

Lauderdale has the privilege – or the burden – of taking over the management of the Lockheed Martin F-35 at a critical point. She was named vice-president and general manager of the programme in April. 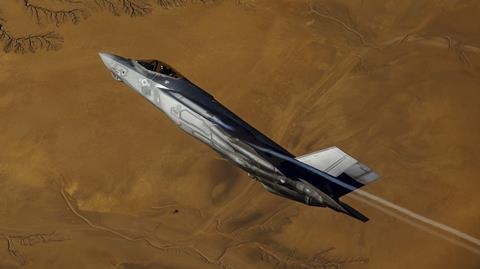 US Air Force wants the F-35A to be the cornerstone of its fleet, but the fighter is plagued with high operating costs and deficiencies

Dogged by sustainment costs that are projected to reach $1.27 trillion over the programme’s 66-year lifecycle and hundreds of deficiencies, the F-35 has become a punching bag for frustrated members of US Congress who are disappointed in the aircraft’s performance and looking to spend money elsewhere, particularly on domestic programmes.

The stealth fighter’s leading customer, the US Air Force (USAF), has also started to look elsewhere for fighter aircraft, most recently with the planned acquisition of 144 Boeing F-15EX Eagle IIs instead of some F-35s. In fact, there is growing suspicion that the service is also slow-walking its planned purchase of 1,763 F-35A aircraft until an alternative is available.

Without lower operating costs, the F-35 programme could lose out on billions of dollars of future orders, as customers’ budgets are consumed with the cost of owning the sophisticated jet. In addition to the USAF, other large buyers of the F-35, such as the UK’s Royal Air Force, appear less committed.

Nonetheless, Lauderdale has a sunny view of the programme, saying that the F-35 is “by all accounts doing a fantastic job”.

“I’m very encouraged by where we are today and will continue to advance the ball, will continue to take on challenges that arise,” she says. “But, from a warfighter perspective, I think the feedback we’re getting is exceptional.”

The USAF has called the F-35A the “cornerstone” of its fleet, Lauderdale points out. Indeed, the F-35 is at the centre of the service’s near-term fighter buying plans, with the jet praised by generals for its computing and networking power, in addition to low-observable characteristics.

Still, there are signs that the pace at which the F-35 is to be acquired may slow down, putting the programme further behind its original fielding plan. In its fiscal year 2022 budget request the USAF asked for 48 examples of the fighter, a dozen fewer than ordered in FY2021.

Lauderdale notes that the stealth fighter has made improvements in flyaway costs and its mission capability rate in recent years. 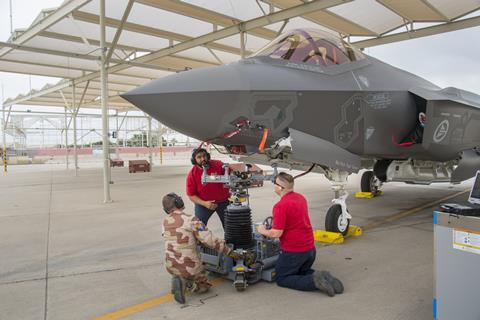 Although Lockheed has reduced the F-35’s flyaway costs and improved its mission capability rate in recent years, the jet is still dogged by high operating costs of $33,000 per hour (in non-inflation adjusted 2012 dollars).

That cost of ownership has riled US legislators. In March, Representative Adam Smith, House Armed Services Committee chairman, said at a Brookings event that he wants to “stop throwing money down that particular rathole”. Other powerful committee chairmen have expressed similar negative sentiments and vowed a reckoning for the beleaguered fighter.

Lauderdale recognises fiscal constraints for the programme. “We realise the budgets are not unlimited,” she says.

To be sure, the F-35 has its supporters. The Joint Strike Fighter Caucus, a group of 132 Republican and Democratic members of the US Congress, many of which have businesses in their districts that do work on the jet, proposed in May that the USAF increase acquisition of the F-35A to 80 examples per year. The International Association of Machinist and Aerospace Workers union, which has thousands of members employed manufacturing the F-35, has also given its full-throated endorsement of the stealth fighter.

Lockheed has pledged to push down the cost to $25,000 per hour by FY2025. But, the company claims it is only directly in control of 39% of operation and sustainment costs. F135 engine maker Pratt & Whitney is responsible for 14% and service customers are responsible for 47%, it says. 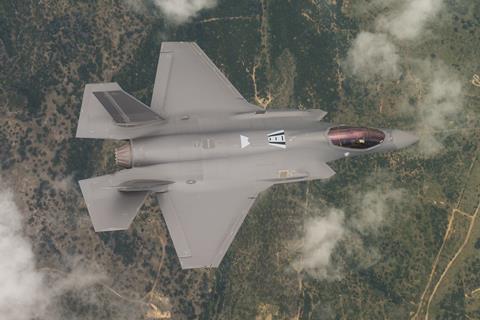 The cost of operating and sustaining the F-35 also is not helped by the 871 deficiencies that were unresolved on the jet in 2020, according to the Director of Operational Test and Evaluation’s (DOT&E’s) 2020 annual report to Congress. The DOT&E is the Department of Defense’s top weapons tester.

Lockheed has reduced its portion of the cost by 44% over the past five years and it can reduce its share by another 40% over the next five years, says Lauderdale.

So, with the majority of the F-35’s operating costs out of its direct control, Lockheed is in the awkward position where it has to suggest cost-saving ideas to the F-35 Joint Program Office in the hope that the programme of record can be saved from its own cost overruns. One suggestion the company has pushed are smaller maintenance crews for the F-35, which might reduce labour costs.

The service has experimented with such ideas, including the Blended Operational Lightning Technician (BOLT) programme at Hill AFB in Utah, which uses fewer maintenance personnel to service the F-35 by cross-training crew members. The USAF has said its BOLT experiment took five fewer man-hours to produce one F-35A flying hour, compared to traditional aircraft maintenance unit processes. The USAF’s Air Combat Command has yet to commit to the concept, however.

Lockheed had also proposed playing a more direct role in the F-35’s maintenance via a Performance Based Logistics contract, a deal with the Joint Program Office to maintain certain levels of performance on the fighter, such as cost per flight hour and mission capability rates, for a flat fee.

Initial interest from the Joint Program Office in a Performance Based Logistics contract appears to have cooled, as Lockheed is now negotiating longer-term deals for spare parts instead. The company believes several years of guaranteed business will allow it and its vendors to have economies of scale that will drive down costs.

Indeed, at this point there does not appear to be a path for the F-35A to reach a $25,000 per hour operating cost by FY2025, Lieutenant General Eric Fick, F-35 programme executive officer, told the House Armed Services Committee in April.

With operating costs projected to remain higher than desired, the USAF has in recent months talked less about the F-35 and more about what comes next. In February, General Charles Brown, chief of staff of the USAF, said the service is studying a future fighter fleet that might include a clean-sheet 4.5th-generation fighter. Such an aircraft would handle lower-end fights, he says.

The USAF is also talking up its Next Generation Air Dominance (NGAD) aircraft. The service is working with undisclosed aerospace manufacturers to develop competing versions of NGAD, with one prototype already having reached first flight in 2020. The USAF plans to have NGAD enter service in the early 2030s.

Brown has said NGAD will not replace the F-35, instead noting that is more likely to replace the Lockheed F-22 Raptor. However, Will Roper, former assistant secretary of the USAF for acquisition, said in his final days on the job in January that the Joint Strike Fighter’s costs may make it vulnerable to being replaced.

That is why NGAD might be important to the USAF, Roper said.