The unnamed Northrop AESA radar was paired with the unspecified AEW&C system from Boeing aboard a Bombardier CRJ700ER regional jet. 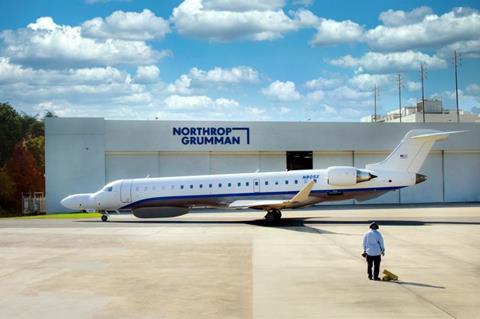 The demonstrations validate that the two systems can “communicate with one another in an open mission system environment”, Boeing said on 9 November.

“After integrating with the Boeing mission computing environment, the AESA sensor was instructed to focus on specific targets, capture and manage data, and communicate the information back to the mission computing system, which was displayed in real-time on an operator’s workstation,” adds Northrop.

Open mission systems are designed to quickly integrate with new hardware or software, allowing customers to inexpensively upgrade their systems using technology from third-party suppliers. The US Air Force has pushed for defence manufacturers to design their products with open mission systems architecture. By moving towards open mission systems, the service hopes to avoid the “vendor lock” that comes with buying proprietary hardware.

Allowing an AESA radar system to be quickly upgraded as new software or hardware come on the market could help the sensor stay relevant against evolving threats, such as new combat aircraft or surface-to-air missiles. In a similar way, the ability to quickly integrate AEW&C systems with new sensors will also keep that platform relevant.

Cirium fleets data indicates that the aircraft involved in the project, N805X, was operated by Lufthansa CityLine from 2003 to 2015, when it was obtained by Northrop.