After beginning his flying with the Royal Air Force, test pilot and one-time Flight International writer John Farley spent two decades developing the Harrier vertical/short take-off and landing fighter in a career which saw close to 100 types in his log book.

When cancellation hung over the embryonic Hawker Siddeley Harrier “Jump Jet” in the early 1960s, test pilot Farley was determined to show the UK government ­exactly what it was threatening to ditch. 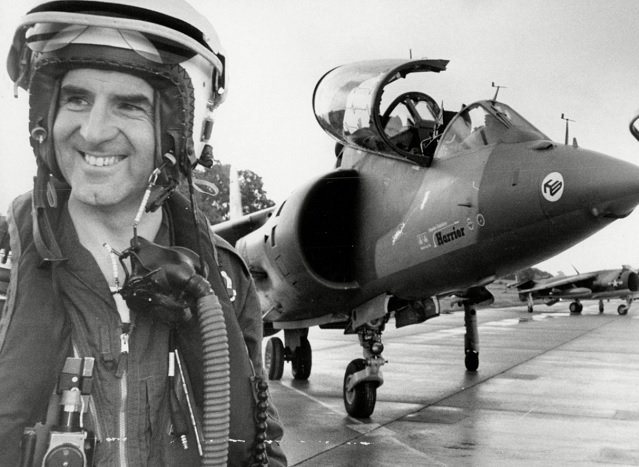 “Appalled that the government might abandon the world lead that we knew the UK had established… we felt people might get the message if we hovered over the Thames alongside the houses of Parliament,” he said. “And to demonstrate the precision of control in the hover, we would push in a couple of stained glass windows using the long probes on the nose!”

In the end, Farley’s proposed precision attack was not needed, and the little British jet went on to become a fast-jet legend. The Harrier’s contribution to the UK Task Force’s success in the South Atlantic in 1982 cannot be overstated. And that it was so capable was in no small part down to Farley.

Born in 1933, Farley recalled in his autobiography, A View From The Hover, that a few weeks before the outbreak of the Second World War, he witnessed the Graf Zeppelin airship pass gracefully over his hometown of Hastings. What ensued was a lifelong love of aviation.

By the time he was 17, Farley had already declared not only his intention to join the RAF, but also to be a test pilot. After an apprenticeship at the Royal Aircraft Establishment, his RAF training began in December 1955 and frontline flying started at RAF Jever, where he began an enduring association with Hawker aircraft – in this case the Hunter Mk4 and Mk6.

As a service test pilot in the RAF, Farley reported for duty at RAE Bedford in 1963. Here he got his hands on a variety of aircraft including the Fairey Delta 2 – nicknamed “Fred” – as well as the Handley Page HP115 Concorde research aircraft and the Avro Vulcan. During his time at Bedford, he also experienced vertical jet flight for the first time with the Harrier prototype – the P.1127, and the Short SC1.

Recalling his days at the RAE in his book, Farley said: “What a joy it was to be able to do research flying in the days when the aim was to acquire knowledge, rather than to make money.”

The RAE set Farley in good stead for 23 years spent as a civilian test pilot with Hawker Siddeley’s Kingston/Dunsfold division, where in 1978 he was appointed chief test pilot.

Farley led the development work on the Sea Harrier and later the improved Harrier II variants. His Harrier displays became the stuff of legend, for which he developed a unique take-off procedure. This would involve hovering at 100ft and using the reaction controls to pitch the nose to 60° while still in the hover. Maximum power would be applied to transition into a “rocket climb”. So tricky was this “seat of the pants” technique to fly that it was a forbidden manoeuvre for service pilots.

During his professional career and then in retirement Farley flew almost 100 aircraft types. Some of these were flown for Flight International, including a first for a western pilot – the Soviet Mikoyan MiG-29. During this Fulcrum test flight in 1990, he performed the famous tailslide manoeuvre as he assessed the fighter’s high-angle-of-attack handling.

But it was the Harrier’s unique flying capabilities that would always impress Farley the most. In 1982, while undertaking Harrier testing at Edwards AFB in California, he found himself among a group of American VIPs watching a Space Shuttle landing. Put on the spot by his hosts for his thoughts on this impressive return from orbit just witnessed, Farley waved in the direction of his Harrier test aircraft, shrugged his shoulders and said “pity it didn’t land vertically”.