The long-serving Eurofighter Typhoon could soon see additional enhancements as part of a Long Term Evolution (LTE) effort, which aims to boost the platform’s capabilities until next-generation assets – such as the Franco-German New Generation Fighter revealed earlier this week – are brought into service.

At the show, Eurofighter, Eurojet Turbo and the NATO Eurofighter and Tornado Management Agency (NETMA), announced the signing of study contracts worth €53.7 million ($60.1 million) that will support the future development of the Typhoon platform. 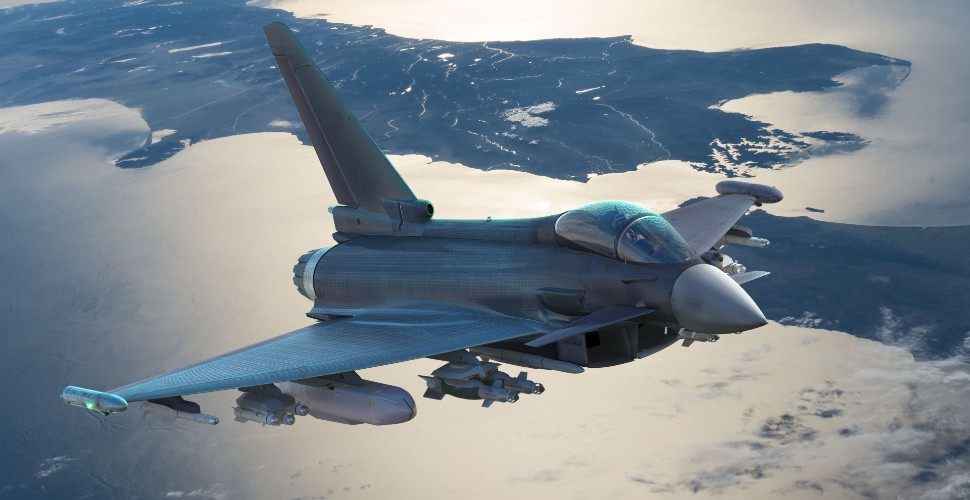 “We look forward to working with our core nations to determine what this aircraft needs to be doing in the next couple of decades,” said Herman Claesen, Eurofighter chief executive, at the show. “And of course this will complement the ongoing drumbeat of phased enhancements [to the Typhoon].”

These include the UK Royal Air Force’s Centurion project, which has seen the capabilities of the now-retired Panavia Tornado GR4 transition to the Typhoon. Elements included integration of the MBDA Brimstone 2 and Storm Shadow air-to-surface weapons, and Meteor air-to-air missile. This has now been completed and is in operational service.

“That capability is quite exceptional, and already proven in theatre with good feedback,” says Claesen.

The contracts will span 19 months for the aircraft itself, and nine months for the engine elements. “This will result in a clear costed roadmap into the future, to give our customers the capabilities they want for the next decade beyond the current enhancement programmes,” says Raffael Klaschka, head of marketing for Eurofighter.

“It is a very strong signal from our core partner nations in the confidence and commitment to further develop and enhance an already fantastic aircraft,” he adds. “It will also make sure that we steer the focus of development in the right direction – and the only right direction is to fulfil the operational needs of today, tomorrow and the future.”

Areas for the LTE study to consider will be operational flexibility, including enhanced EJ200 engine performance that could improve thrust, range and persistence, as well as “adaptive power and cooling techniques”.

Human-machine interface improvements could include a new large area display as well as enhancements to the pilot’s helmet display. A key area will also be improving the Typhoon’s mission system architecture, introducing aspects such as high-speed data networks and enhanced target data management.

The latter is seen as particularly important in future combat, as more digital data is generated, transmitted and utilised both from the platform itself via multispectral sensors, and via “discreet” high-speed data links, including unmanned “loyal wingmen”.

“This will maintain Eurofighter’s leading-edge capability by ensuring it has the electronic warfare suite that will be required in this highly contested and congested future operating environment,” says Klaschka.

The threats to aircraft have “never been so hostile”, notes Mark Hewer, vice-president of integrated mission solutions at Leonardo, because many are now agile, programmable and updatable. “Threats such as the SA-21 [S-400] and SA-22 [Pantsir S1] – these high-end, long-range and short-range systems are becoming integrated, and that allows the threat environment to be even more lethal.”

The LTE study will also look at enhancing the Praetorian Defensive Aids Sub System (DASS), which is supplied by the EuroDASS consortium, led by Leonardo and also involving Elettronica, Hensoldt and Indra.

Hewer says that the technologies that make up the Praetorian DASS – soon to also include Leonardo's BriteCloud expendable decoy – provide the Typhoon with “digital stealth” technologies. The LTE study is likely to look at physical stealth improvements also, although this will probably be limited to special coatings rather than an airframe redesign. “Stealth is important, but counter-stealth technologies are developing,” says Hewer.

The study is additional to the ongoing E-Scan radar effort, which aims to upgrade the Eurofighter's current mechanically-scanned radar with a new active electronically scanned array (AESA) system. The first AESA-equipped Typhoon will be delivered to the Kuwaiti air force, although it remains unclear when partner nations Germany, Italy, Spain and the UK will adopt this capability.