The Boeing KC-46A tanker has made its air show debut in the static park, with an aircraft from US Air Force’s 931st Refueling Wing, based at McConnell AFB, in Kansas.

The appearance marks a key milestone for the programme, which has suffered several delays, including well-publicised production issues earlier this year involving foreign object debris, which led to deliveries being halted twice the US Air Force. 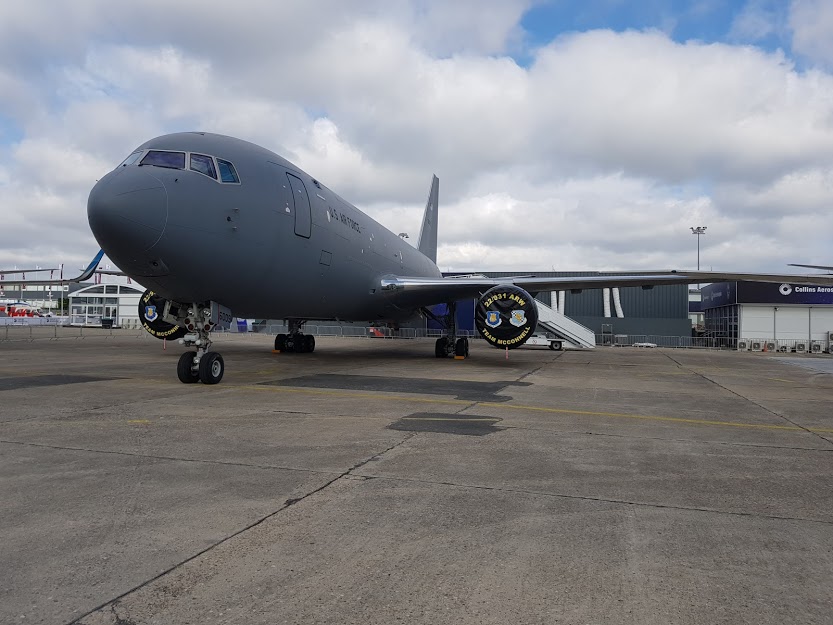 The appearance of the aircraft at the show is a boost for Boeing’s international marketing efforts. At a media roundtable in Singapore in late May, Boeing vice-president Jeff Shockey said the airframer sees six new prospective KC-46A international buyers, for up to 20 aircraft. These are: Indonesia, Israel, Qatar, NATO, Norway and the United Arab Emirates.

Delays in the 767-based KC-46A’s development meant it missed out on several tanker competitions, with several potential customers opting instead for the Airbus Defence & Space A330 Multi-Role Tanker Transport. The UAE operates three MRTTs, but is also potentially interested in the Boeing type. The MRTT is also at this year’s show, with the French air force providing an in-service example for the static display.

The A330 platform also forms the basis for the Multinational Multi-Role Tanker Transport Fleet (MMF), a consortium of Belgium, Germany, Luxembourg, the Netherlands and Norway that plans to share a fleet of eight tankers. Tankers are scheduled to be delivered between 2020 and 2024.

“Anyone that does not have a dedicated tanker fleet we are in conversations with,” said Matt Carreon, director of international sales and commercial derivative aircraft, in a press briefing at Boeing’s St. Louis, Missouri facilities in mid-May. “The countries that may be part of a consortium, but don’t have national assets we are also in discussions with. They are realising, especially the F-35 customers, that a dedicated tanker asset is needed because of refuelling requirements of the F-35.”

The USAF plans to certificate the KC-46A on 64 types of aircraft by 2021, including the Eurofighter Typhoon and Dassault Rafale.