In particular, the US Air Force (USAF) would like the Kratos XQ-58A Valkyrie to be fielded by FY2022. The so-called loyal wingman unmanned air vehicle (UAV) – also called an attritable aircraft, due to its low cost – had its second test flight on 11 June. The flight lasted 71min.

The USAF would like 20 to 30 examples of the UAV to be used for an experimentation campaign, said Will Roper, assistant secretary of the air force for acquisition, technology and logistics, at the show on 17 June. 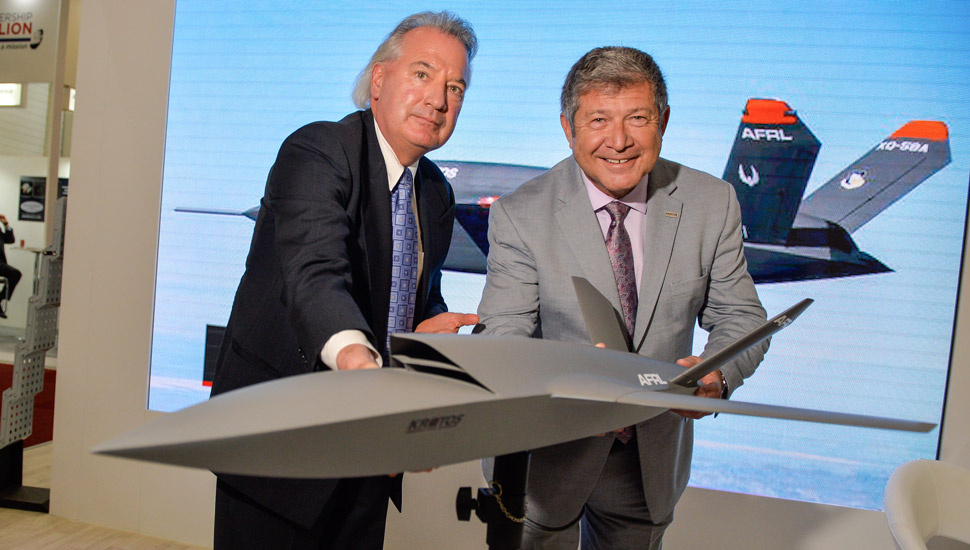 “Depending on what comes out of the campaign, the idea would be to go to a programme of record or start spiralling the development to get something better,” he says. “We are getting strong buy-in, strong appetite and pull for attritable systems by our pilots.”

The company has built three XQ-58A demonstrators, with one owned by the USAF and two owned by Kratos. Kratos retains 100% ownership of the intellectual property behind the aircraft.

The USAF is pleased with the flight testing results of the XQ-58A so far, says Roper. The service is excited by the aircraft’s low price – $3 million a copy for the first 99 produced, and $2 million a copy for aircraft produced beyond that, Kratos says.

The Valkyrie has a total range of 3,000nm (5,500km) and is about two-thirds the size of a Lockheed Martin F-16, says Kratos. The firm declines to say if it is capable of supersonic flight. The UAV is designed as a long-range strike, and intelligence, surveillance and reconnaissance aircraft.

Efforts are underway to make sure the “F-35 and F-15 command control and communication systems could control swarms of Loyal Wingman drones,” said Eric DeMarco, chief executive of Kratos, in a May earnings call.

The company’s 10 tactical UAVs are also each unique and are not variants, says Jeff Herro, Kratos USD senior-vice president for business development.

The firm expects two of those to be under development contracts by the end of 2019, with possibly all four to be contracted in 2020. Several programmes are expected to move into production in the next 12 months. The company has invested more than $100 million in developing its stable of tactical UAVs over the past several years.

Kratos has secured licenses from the US State Department for the XQ-58A to export to the UK and Australia. Boeing and government of Australia are co-developing their own loyal wingman aircraft, called the Airpower Teaming System, but Kratos says it is not involved in that effort. Kratos declines to say if it has any foreign customers for its tactical UAVs.

“Majority of these are US [customers]. We’ll leave it at that,” says Herro.