Lockheed Martin is working on a maritime patrol aircraft retrofit kit for the C-130 Hercules.

The kit is intended to "roll on" new C-130Js, as well as legacy variants of the military transport, with initial concepts calling for wing-mounted Harpoon anti-ship missiles and clusters of Hellfire air-to-ground missiles, as well as torpedoes to be stored in the cargo bay and launched off the back ramp.

The aircraft could sport a number of sensors including a multimode radar, a nose-mounted electro-optical/infrared camera, droppable sonar buoys, wing-tip-mounted electronic support measures, and a magnetic anomaly detector boom on the tail.

Lockheed Martin does not have a formal name for the system yet, but refers to it generically as the MPA kit. The company is competing against dedicated maritime patrol aircraft such as Boeing's P-8A Poseidon. 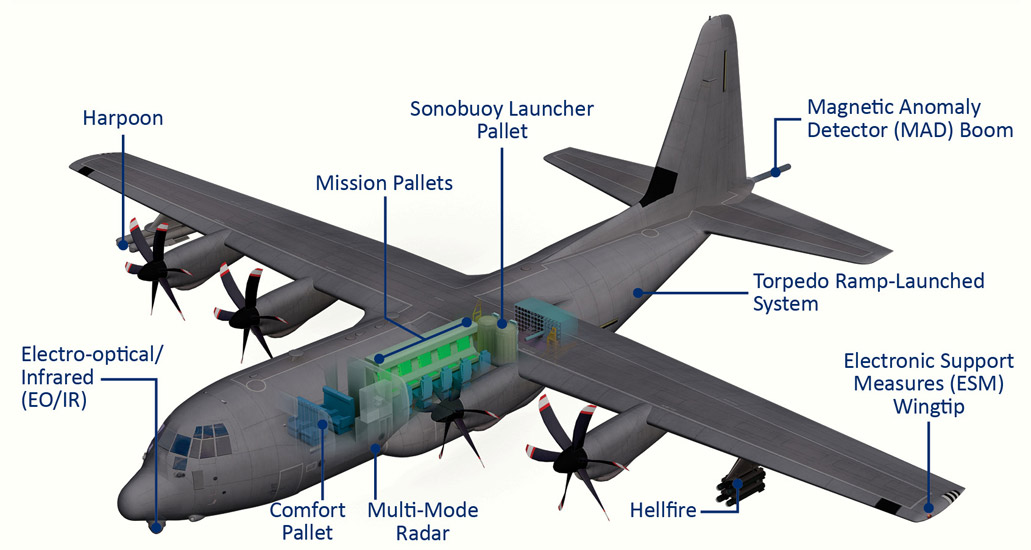 "We think it's a very good alternative for the marketplace compared to some of the other choices out there that would usually be much more expensive," said Tony Frese, Lockheed Martin vice-president of business development for air mobility and maritime missions, at the show. "They don't have to have a dedicated maritime patrol aircraft in their inventory. They can in relatively short order change between maritime patrol and air transport mode."

Lockheed Martin points out its experience with the US Navy's P-3 Orion MPA fleet and the US Coast Guard HC-130J MPA aircraft. The USCG is acquiring a fleet of 22 HC-130J aircraft to replace its older HC-130Hs. Lockheed Martin says it has had no discussions with the USN about its proposed MPA kit.

The MPA kit is unlikely to be available for installation for three to four years, said Lockheed Martin. "These are concepts that we're in discussions now with customers, as well as suppliers, so it would take us a bit of time," said Frese. "The point is these are existing systems that we would just integrate on the aircraft. Our focus would very much be non-developmental. It's very much on the integration side."

The company is hoping that the MPA kit could be added to the C-130 airframe with very little structural modifications. It is even looking at technology to remove the need to attach a MAD boom to the tail. "There are some sensors I understand that you can install inside the aircraft that you won't have to put on the outside," said Frese. He declined to name the technology or the manufacturer.

Ultimately, Lockheed Martin believes the retrofit market may be a bigger sales opportunity than installing the MPA kit on new C-130Js. "There's maritime patrol requirements in Europe. There's a lot of C-130s in Europe," said Frese. "There's maritime patrol requirements in Asia. And, there's a significant number of Asian countries that have C-130s now."

There are more than 1,200 C-130s in service across the world, according to Cirium's Fleets Analyzer.