The Hindustan Aeronautics LCA Navy fighter has passed a milestone with the engagement of an arresting hook in taxi tests.

HAL says that this is the first of several tests at INS Goa that will develop the type’s arrestor hook capability.

“Carrier compatibility trials (CCT) of naval aircraft are slated to be carried out at shore-based test facilities built at Indian Naval Base Goa,” says HAL. “CCT involves completion of extensive shore-based trials before embarking on an actual deck. This trial is the stepping stone towards completion of CCT trials of LCA Navy.” 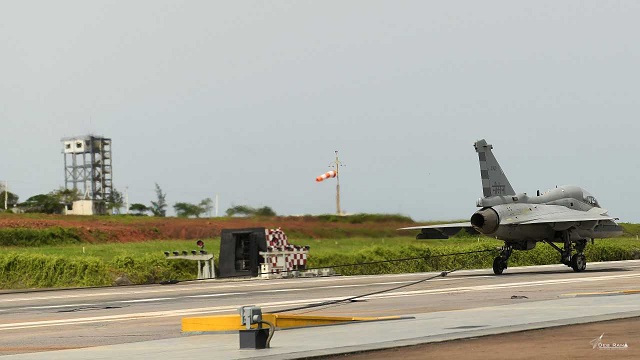 New Delhi operates a single aircraft carrier, the Russian-built Vikramaditya, from which RAC MiG-29Ks operate. A second locally built carrier, INS Vikrant, is set to enter service in the early 2020s, after years of delays. Both of these vessels use ski-jumps to launch jets, which limits aircraft performance. A third carrier is planned, which is to be equipped with electromagnetic aircraft launch systems (EMALS).

The aircraft that will operate from the new carriers has yet to be determined. New Delhi is looking to obtain 57 multirole carrier-borne fighters (MRCBF) for its future flattops. This competition is likely to attract Boeing with the F/A-18 E/F, Dassault with the Rafale, and Saab with its proposed Gripen Maritime.

In addition, India’s Aeronautical Development Agency continues work on the LCA Navy Mk 2, based on the Tejas platform.

The LCA Navy fighter being used for arresting wire tests is based on the Tejas Mk. 1, and is powered by a General Electric F404 engine. It features a strengthened airframe, landing gear, and the tailhook.

If developed, the LCA Navy Mk. II would be a major update of the original Tejas design, and use the more powerful F414 engine.