US Air Force investigators have found that the fatal Sierra Nevada/Embraer A-29 Super Tucano crash in June 2018 during the service’s Light Attack Experiment was caused by pilot error.

After the crash the USAF suspended further experimental flights and eventually finished its testing programme prematurely. The pilot flying the A-29 died as a result of the crash, while the aircraft’s weapons systems officer was able to eject and parachute to safety, sustaining only minor injuries.

The accident stemmed from the pilot’s over-control of the aircraft, which caused an inadvertent entry into an uncontrolled spiral dive, according to a United States Air Force Aircraft Accident Investigation Board Report, released 22 February. The aircraft entered an uncontrolled spiral dive after the pilot released a 500lb (227kg) GBU-12 bomb and failed to compensate properly for the aircraft’s sudden change in weight balance. 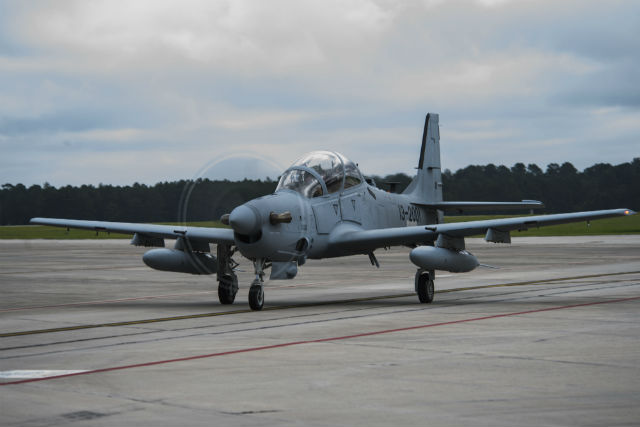 The pilot didn’t apply adequate recovery control inputs to stop the spiral, says the report. To make matters worse, the pilot ejected 700ft above ground level, only 1.5s before impact, as opposed to the 5,000ft minimum height recommendation by the A-29 flight manual for uncontrolled situations. Despite his ejection seat clearing the aircraft and the smaller drogue parachute deploying, there wasn’t enough time for the main chute to open. The pilot was killed on impact.

The weapons systems officer ejected 2,000ft above ground level – also below the recommended minimum height – but was able to survive because there was enough time for his main parachute to deploy and slow his descent. He sustained minor injuries, such as lacerations, abrasions and bruises, says the report.

The USAF’s Light Attack Experiment is aimed at finding cheaper-to-fly aircraft for the Defense Department, US allies and partner nations to operate. It is on hold as the service’s leadership ponders expanding the types and number of aircraft under consideration for the programme. Previously, the only two aircraft in consideration were the Textron Aviation AT-6 Wolverine and Sierra Nevada/Embraer A-29 Super Tucano.