The first time Pratt & Whitney’s GatorWorks attempted to 3D-print a combustor for the miniature TJ-150 jet engine, the results were anything but perfect. 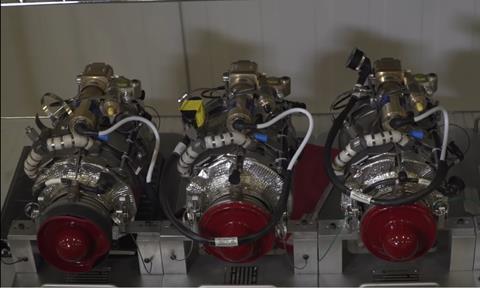 But the manufacturing flop was beside the point, he says.

“We learned a lot from it”, Stagney says. “We need to create the opportunities for our engineers to learn, and not put ourselves in a situation where the stakes are so high that we have to be so conservative that we can’t take calculated risks.”

GatorWorks can afford to take risks because it is not designing or manufacturing ultra-reliable turbofan engines used on fighter jets or airliners. Instead, it is focused on low-cost military engines such as the TJ-150, which is used to power small cruise missiles.

The rapid prototyping arm is trying to capitalise on the US Air Force’s (USAF’s) growing demand for low-cost cruise missiles, powered glide bombs and “attritable” unmanned air vehicles (UAVs), a type of limited-use drone that can be lost to combat attrition and then quickly and cheaply replaced.

After decades of buying high-end fighter jets with high-end prices, such as the Lockheed Martin F-35 stealth fighter – powered by P&W’s F135 turbine – the USAF is rebalancing its fleet with more inexpensive platforms.

The shift comes as Beijing has earned its place as Washington’s leading adversary. China has the world’s largest population and the most manufacturing output, and by the 2030s might have the top economy. Those qualities give Beijing advantages in a war of attrition.

To cancel out those advantages, the USAF is pushing the development of low-cost aircraft and weapons – items the US Department of Defense can afford to use or lose en masse without breaking its budget. Such platforms need low-cost engines to keep prices down.

Because limited-use engines – for expendable UAVs or missiles – can be less than perfect, the door has been opened for experimentation.

Launched in mid-2018, GatorWorks has set a goal of cutting the lead time and expense of low-cost military engines by 50%. The prototyping arm leans heavily on digital technology, such as model-based systems engineering software, and the agile development method, an iterative approach borrowed from the world of Silicon Valley software programming.

The company shares its digital designs directly with customers, allowing for design changes to be made in consultation with clients during quarterly development sprints, says Stagney.

“In the past, we’d have to pass requirements back and forth,” he says. “The iterations, just in terms of even evaluating different designs, would take a long time.”

Now, GatorWorks will sprint to create a new minimum viable product within a quarter, using 3D printing and other technologies to speed the process, and then share the results with clients, Stagney says. The customers will give feedback, which will be incorporated into design changes in the next quarterly sprint.

The process is bearing fruit in the form of half a dozen funded technology and product development contracts, says Stagney. One example of success is a new high-speed engine that GatorWorks has won a contract to develop. Stagney declines to give specifics about the powerplant, but says the award is worth tens of millions of dollars.

Using 3D printing, GatorWorks is experimenting with ways to drastically reduce the number of parts in the TJ-150. That 150lb-thrust (0.667kN) turbine engine powers the Raytheon Miniature Air-Launched Decoy, a low-cost cruise missile intended to confuse enemy air defence systems. It also powers the MBDA Spear air-to-surface missile, which is to be fielded on the UK Royal Navy’s carrier-based Lockheed Martin F-35B fleet.

P&W thinks it can consolidate the TJ-150’s number of parts from 400 to about half a dozen. It calculates that the process will cut the engine’s cost in half.

Using a 3D printer – instead of subcontracting to an outside machine shop – also saves time. “Right now, if we want to do an iteration, we’ve got hard tooling that’s about a 12-month lead time,” Stagney says. “If we can do additive, we can eliminate that lead time and print new configurations in a couple of weeks.”

3D-printed rotating parts for the TJ-150 “really push the boundaries of our additive technology,” says Stagney. “Rotating parts are [the] most difficult because of the high stresses and dynamics those parts experience.”

GatorWorks hopes to fire up the 3D-printed TJ-150 by the end of the year.

“If it doesn’t work, well, we’ll do another sprint,” Stagney says.