Serbia's defence ministry has detailed a major upgrade programme being performed on its Soko J-22 Orao combat aircraft and NJ-22 trainers, which will significantly enhance the type's operational capabilities.

Speaking at the Partner 2019 exhibition in Belgrade in late June, Nenad Miloradovic, the defence ministry's assistant for defence technologies, confirmed that the modernisation activity – unofficially dubbed Orao 2.0 – will be conducted in two phases. 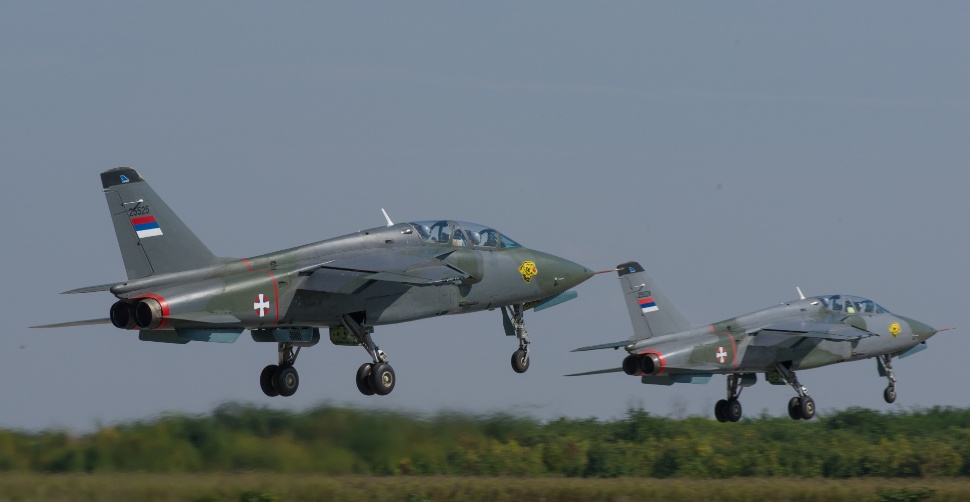 Work to be completed by the end of this year includes incorporating new navigation and targeting systems in the rear cockpit of the two-seat NJ-22. Miloradovic says Belgrade has purchased Safran's Sigma 95 inertial navigation system, which sources indicate will be integrated with a mission computer and multifunctional displays developed by local manufacturer Teleoptik-Ziroskopi.

The first phase of work will also integrate new weapons. This process will enable the NJ-22 to be flown with a weapons system officer in the rear cockpit, so that the type can serve as a dedicated ground-attack asset.

Miloradovic says the second phase of modernisation work will include "complete digitalisation" of the aircraft's cockpit, without revealing further details.

Serbia signed a memorandum of understanding with Airbus in 2016 linked to "technological support in modernisation of training and light combat aircraft", as part of a wider partnership linked to Belgrade's purchase of H145M and H215 helicopters.

The defence ministry says it will gain new ground-attack weapons with a range of up to 22nm (40km) and "beyond visual range" performance, along with a laser-guided rocket update.

Other additions could include integrating the infrared-guided Vympel R-60MK short-range air-to-air missile and countermeasures equipment.

Serbia currently has about 10 J-22 and NJ-22 Oraos in an airworthy condition, plus a number of stored airframes, including in the IJ and INJ reconnaissance variants. The platform's expected service life was initially set at 24 years, but structural inspections have indicated that some examples could have this doubled or be approved for a further 1,000 flight hours following overhaul.