Sierra Nevada has been awarded a $700 million contract to develop and integrate radio frequency countermeasure systems aboard an undisclosed number of US Special Operations Command (USSOCOM) Lockheed Martin C-130Js.

In particular, the systems are to be installed on the special operation force’s AC-130J Ghostrider gunship and MC-130J Commando II transport, says a US Department of Defense (DoD) contract notice posted online on 1 July. 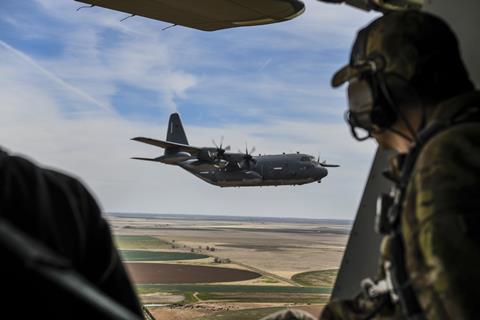 The radio frequency countermeasures are designed to jam air- or land-based enemy radar and missile systems, says the DoD. USSOCOM relies upon countermeasures, as well as other tactics, to suppress anti-aircraft weapons when flying special forces troops behind enemy lines.

Sierra Nevada says it will integrate a radio frequency countermeasure system supplied by Northrop Grumman, but declines to go into detail on what sort of customisation it will provide.

The company is also the prime contractor for the MC-130J’s airborne mission networking systems.

The MC-130J is used as a low-level in-flight refuelling tanker for special operations helicopters and tiltrotor aircraft. It is also used as a clandestine troop and cargo transport.