The aircraft, which is powered by two General Electric J85 engines salvaged from retired Northrop T-38 Talon trainer jets, is intended to be used as a stealth target drone for the US Air Force (USAF) to shoot down. 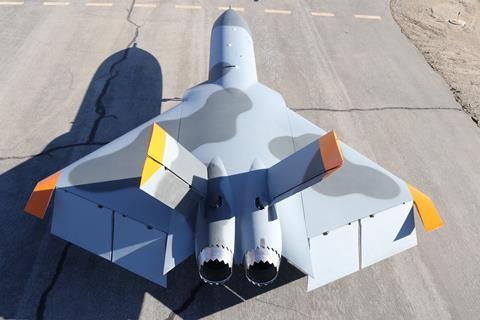 “We ran both engines all the way to [military] power at the same time,” says Roger Hayes, president and co-owner of Sierra Technical. “We tested out our flight controls – elevons and rudders – and everything worked well.”

The unmanned air vehicle (UAV) should be ready for its first test flight during the first quarter of 2020, says Hayes.

However, because the 5GAT is inherently low-cost – estimated by Sierra Technical to be less than $10 million per production copy – and has a low-observable shape the company is also openly pitching it as an “attritable” Loyal Wingman stealth aircraft.

Attritable aircraft are a new concept in aerial warfare:  UAVs so cheap that combat losses won’t break the bank. For example, the USAF’s Loyal Wingman programme is aimed at developing buddy attritable aircraft for its fleet of manned fighters, such as the Lockheed Martin F-35 Lightning II. It could be asked to take on dangerous tasks or might operate as a robotic scout. 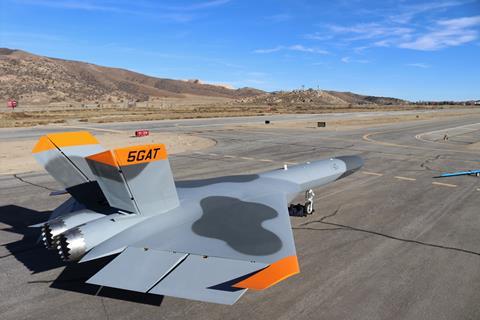 Sierra Technical believes its 5GAT has abilities that would give it advantages over Kratos Defense’s XQ-58A Valkerie, a pioneering attritable UAV built in collaboration with the US Air Force Research Laboratory.

In particular, the 5GAT’s two J85 engines give it the ability to fly high-subsonic speeds.

“We’re going to limit it to high-subsonic,” says Hayes. “It would probably go supersonic without much trouble, but none of the structure was analysed or designed for supersonic [flight], nor were the inlet lips.”

The 5GAT was commissioned as a stealth target aircraft by the Pentagon’s Director of Operational Test and Evaluation (DOT&E), and supersonic flight was not part of its mission requirements, explains Hayes. It is designed to be a disposable stealth aircraft for mock air combat, and a sparring partner that helps combat pilots learn how to shoot down stealth aircraft, such as Russia’s Sukhoi Su-57 or China’s Chengdu J-20.

DOT&E paid for the aircraft to be designed, built and flown after the USAF and US Navy initially declined to build stealth targets of their own. However, the USAF last year released a request for information for its own Next-Generation Aerial Target, a stealth target programme which might replace the DOT&E’s effort. 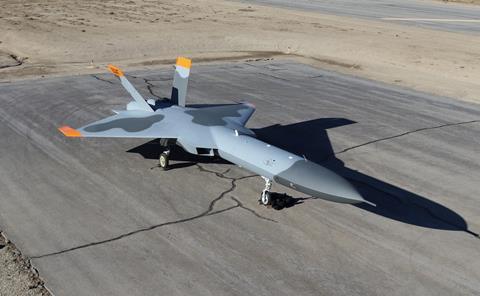 In addition to being stealthy, Hayes says the aircraft can manoeuvre at +7.5g and -2g for short periods.

“However, it cannot sustain +7.5g or -2g. The aircraft will bleed off energy very quickly due to limitation of the thrust from these engines,” says Hayes. “We can make 7.5g turns, but not sustain them for very long – that is basically a typical operational scenario.”

The 5GAT can carry weapons on external pylons, though it doesn’t have provisions for an internal weapons bay, a capability that would require a substantial redesign.

“But, we can carry all kinds of electronics, artificial intelligence gear, [intelligence, surveillance and reconnaissance] equipment,” says Hayes.

Hayes declines to make a detailed comparison of the XQ-58 and the 5GAT. That’s because Sierra Technical helped design the XQ-58A and he says it would be a conflict of interest to disclose that information.

Hayes notes that competing with a business partner on a separate product line happens frequently in the US defence industry. “You know, it’s strange bedfellows, but it’s common in the industry,” he says.

Because of the wide variety of Loyal Wingman applications, from air combat to intelligence, surveillance and reconnaissance roles, Hayes says he believes there is room for both aircraft.