Stratolaunch, owner of the world’s largest aircraft, has completed a critical design review of its Talon-A hypersonic test vehicle.

The Mojave, California-based company plans to use its massive, six-engined Roc aircraft as a launch platform for hypersonic vehicles and missiles. The aircraft, which has a record-setting wingspan of 117m (385ft), was developed by Scaled Composites to air-launch rockets into orbit. 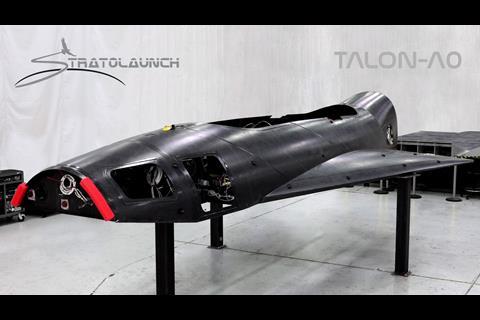 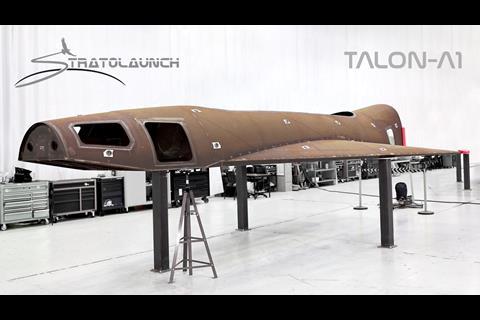 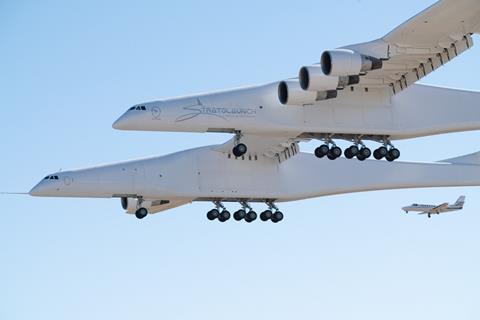 Stratolaunch said on 27 September that the completion of the critical design review puts it on track to flight test its Talon hypersonic vehicles in 2022. The high-speed unmanned air vehicles (UAVs) would then enter service with potential government and commercial customers by 2023.

The US Department of Defense is in a hypersonic missile arms race with China and Russia. It is investing billions of dollars into developing different types of hypersonic missiles. Hypersonic is defined as anything flying faster than M5.

Yet, the Pentagon has a limited number of aircraft that are large enough and have enough lifting capacity to air-launch hypersonic missiles for test flights. The US Air Force often uses its Boeing B-52 Stratofortress, but that heavy bomber has other missions it must fulfil, limiting its availability. In light of the flight testing bottleneck, Stratolaunch wants to be a launch test-platform for hire.

The company says it has been building its Talon-A test vehicles in parallel with its critical design review. The airframe of the initial test vehicle, the Talon-A0, is complete and Stratolaunch is working to install subsystems in the UAV before functional testing in early 2022.

“It will serve as a pathfinder for mission operations, including a flight test demonstrating safe release and separation from the carrier aircraft,” says the firm.

A second vehicle, dubbed Talon-A1, is being assembled and will be the company’s first hypersonic-capable UAV.

Talon-A is 8.5m long, with a wingspan of 3.4m. It has a launch weight of about 2,720kg (6,000lb). The UAV is intended to fly up to M6 and then glide autonomously back to earth where it would land on a conventional runway. The company says it will also be capable of autonomous take-off from a conventional runway using its rocket engine.

Stratolaunch says the Talon-A will have instruments integrated into its airframe to obtain aerothermal and performance data. It will also be able to carry experimental payloads.

The behemoth Roc has only flown twice since 2019, but Stratolaunch plans to conduct additional flight tests in the coming months. After those flights, the company plans to install pylons under its centre wing for carrying three Talon-A vehicles at once.