The high cost of survival in an air war with China

To gain the upper hand in air combat, it is often better to focus on the ground. That was the opinion of one early air power theorist; as General Giulio Douhet of the Italian army noted in 1921: "It is easier and more effective to destroy the enemy's aerial power by destroying his nests and eggs on the ground than to hunt his flying birds in the air." And for the better part of the past century, Douhet's maxim has shaped US Air Force (USAF) strategy, as its commanders have sought to make their air bases fortified and resilient against attack.

That philosophy prevailed until threats to US air bases all but disappeared with the fall of the Soviet Union in 1991. Over the past three decades, the service has focused its efforts on seeking efficiencies through consolidating operations to fewer, larger airfields.

But the era of efficiencies might now be over. As China buys and builds new long-range fighters, bombers, cruise missiles and ballistic missiles – as well as far-sighted satellites and surveillance aircraft – the USA is revisiting the idea of the vulnerable air base. A string of US and Allied facilities in the Western Pacific, including areas as far from any homeland as Andersen AFB in Guam are now viewed as exposed to potential attack from Beijing.

According to an August 2019 report by United States Studies Centre at the University of Sydney, in Australia: "This growing arsenal of accurate long-range missiles poses a major threat to almost all American, allied and partner bases, airstrips, ports and military installations in the Western Pacific.

"As these facilities could be rendered useless by precision strikes in the opening hours of a conflict, the [Chinese] missile threat challenges America's ability to freely operate its forces from forward locations throughout the region.”

In response, the USAF is considering a new strategy known as distributed operations, a concept that calls for the service to operate from a greater number of more spread out air bases, of sizes small and large, so as to increase the number of targets an adversary would need to attack. In other words, the USAF has decided not to put all of its eggs in one basket. 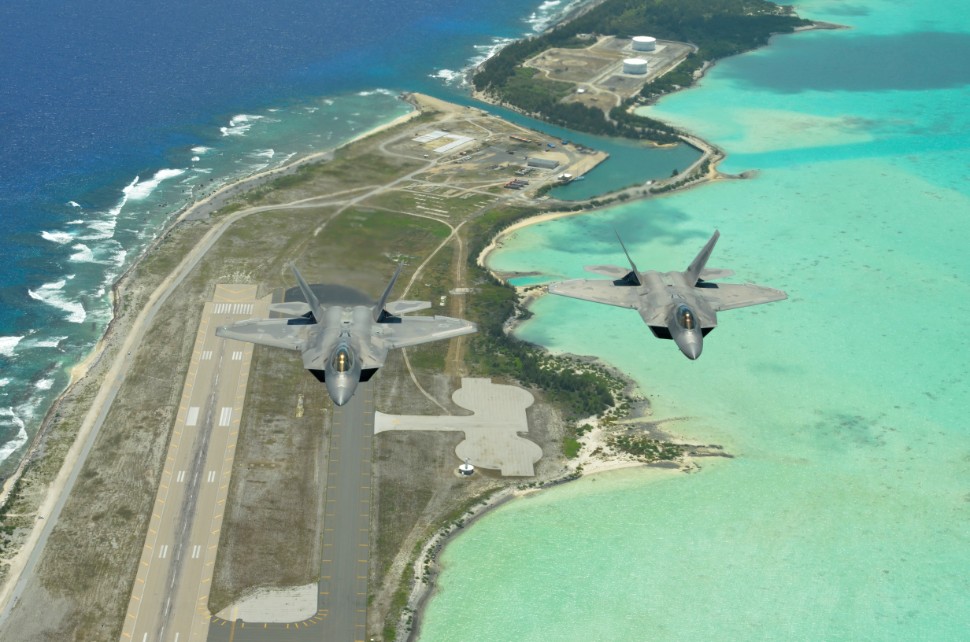 The distributed operations concept increases the odds of aircraft surviving or avoiding being attacked, according to a USAF-commissioned study by the RAND Corporation, which was released to the public in July 2019.

"It's tough to defend, to defeat a… precision cruise missile with a big warhead," says RAND Corporation senior political scientist Alan Vick, one of the study's co-authors. "But then, it's very costly for them to have a weapon of that size and quality against every aircraft (and) location."

Distributed operations are also costly for the USA, however. As the report observes, more bases means more resources: anti-aircraft weapons, ammunition depots, communications equipment, fuel storage, aircraft hangars, maintenance personnel, soldiers to defend the airfield perimeter and headquarters staff. It could also mean a decentralised command and control structure, which could be complex and reliant on communications that are vulnerable to cyberattack.

To make such a strategy work, the USAF could use a mixture of three types of air bases: a stay-and-fight base, a drop-in facility and a fighter forward arming and refuelling point (FARP), says the RAND Corporation. The mixture of bases would have different strengths and weaknesses for various missions, given the available geography and resources the service has access to during a conflict.

A stay-and-fight base would likely be the furthest from combat zones and the most heavily fortified with active and passive defences. Active defences might include Patriot missiles for air defence and a THAAD high-altitude anti-ballistic missile defence system. Passive defence could include camouflage and concrete aircraft hangars, as well as dispersal of aircraft, fuel, and payloads across the airfield.

Drop-in and FARP facilities would have fewer defences. The former would only have enough strength to recover from an attack to evacuate aircraft. The latter would only be used for a few hours, enough time for a fighter to receive quick maintenance, fuel and ammunition, before an adversary would detect their location and launch an attack – effectively forcing the enemy to play whack-a-mole.

Beyond the extra personnel, equipment and infrastructure needed to support distributed operations, the RAND report says the USAF would take on the cost of crew retraining and regular practice exercises. The USA might also have to return to a system of pre-positioning equipment at remote bases like it did during the Cold War in Europe. This strategy not only requires spending more on equipment but creates difficult logistical and training headaches as hardware can become mismatched across the service's inventory, says Vick.

"A lot of money is invested in what from an efficiency perspective looks duplicative. But it's not," he says: "It’s essential if you want to prevail."

More money might also have to be spent hiring USAF security personnel, known as defenders, to protect the perimeters of air bases in East Asia, which can be nearly 12 miles (20km) in length.

The USAF has been thinking about some of these problems and practising distributed operations for about a decade. Since 2009, it has practised the FARP basing concept through a number of exercises, including "Rapid Raptor". In that exercise, the service lands at least four Lockheed Martin F-22 Raptors and a C-17 Globemaster III strategic air transport loaded with support personnel, fuel and munitions on a remote airfield. The USAF claims it can arrange a rendezvous anywhere in the world within 24h.

For take-off, an F-22 loaded with fuel and weapons needs a runway at least 1,830m (6,000ft) long. There are 258 such airstrips in the Western Pacific, according to a 2014 report in published Air & Space Power Journal, but such exercises are reliant on the USAF's limited airlift capacity, notes Vick. 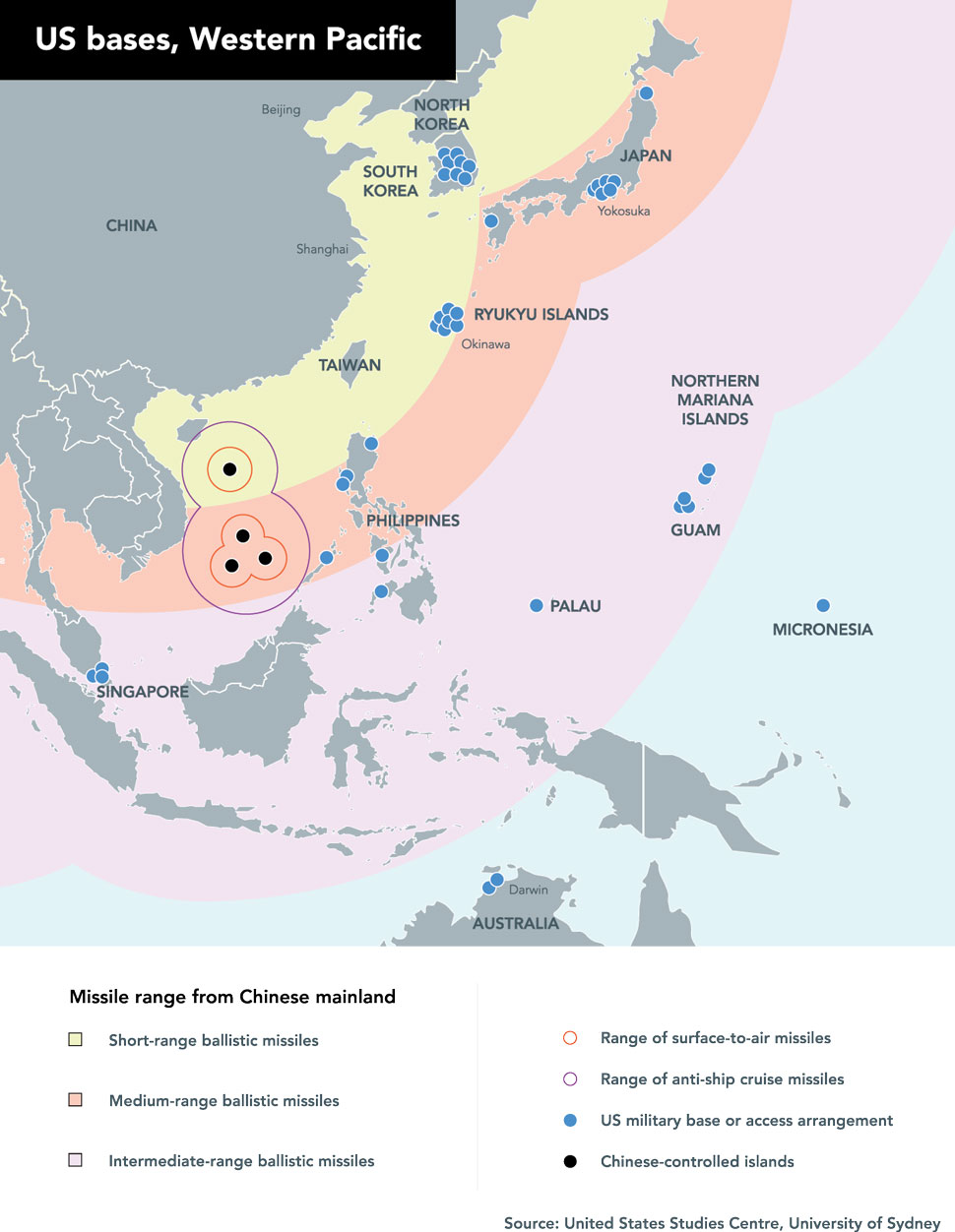 It is unclear how well FARP bases, exemplified by the Rapid Raptor concept, or even drop-in bases, would work on a large scale during long periods of combat. High-end stealth aircraft such as the F-22 and Lockheed Martin F-35 Lightning II require a lot of maintenance to be ready for combat, especially to maintain stealth coatings. Repairs to the F-22's stealth coating have to be carried out in temperature- and humidity-controlled hangars, with maintenance personnel often having to painstakingly chip away at degraded stealth material using a hammer and chisel before bonding a new coating.

Even now, in peacetime and at USAF air bases with dedicated resources, F-22 availability is sub standard. The aircraft will fail to meet the Pentagon's goal of an 80% mission capability rate by September 2019, said US defense secretary Mark Esper, in prepared testimony for his confirmation hearing with the US Senate Armed Services Committee in July 2019. "The F-22 fleet is still challenged by the lack of low-observable maintenance capacity, exacerbated by the extreme damage at Tyndall AFB from the effects of Hurricane Michael," he says. Notably, F-22s were damaged during the October 2018 hurricane because existing repair issues did not allow them to fly away.

The F-35 will also fail to meet its 80% mission capability rate by the same deadline because of ransparent canopy supply shortages, Esper adds.

To meet maintenance demands in distributed operations, Lockheed Martin and the USAF are experimenting with ways to train maintenance personnel across a large number of F-35 subsystems, allowing each crewmember to do a greater variety of work. Lockheed Martin's Nose-to-Tail initiative "has reduced the dedicated maintenance team to less than five personnel per aircraft, per shift – down from about 12", the company told FlightGlobal in May 2019. The USAF is running a similar programme called Blended Operational Lightning Technician.

Still, the need for such resource intensive maintenance, such as stealth coating repair, might mean that fifth-generation fighters have to be constantly rotated away from the front lines, a complex juggling act, says Miranda Priebe, a RAND Corporation political scientist and another one of the report’s co-authors.

"You probably have a concept where fighters are moving forward into these distributed bases, and then probably have to go back further in the rear for certain kinds of maintenance," she says. "So, it is a more complicated problem and certainly different than the way we do things now. You're probably going to be accepting more risk in some of your maintenance decisions just to keep things moving."