The British Ministry of Defense (MOD) is in talks with Boeing to acquire the E-7 Wedgetail Airborne Early Warning and Control System.

The MOD said after a market analysis and discussions with providers of other systems it had concluded the E-7 Wedgetail was the most cost-effective aircraft available and potentially could be used in collaboration with Australia, an ally and member of the “Five Eyes” intelligence sharing treaty.

“The Wedgetail is the stand-out performer in our pursuit of a new battlespace surveillance aircraft, and has already proved itself in Iraq and Syria [with the Royal Australian Air Force],” said defence secretary Gavin Williamson. “Our future with Australia will already see us operate the same maritime patrol aircraft, world-class Type 26 warships and supersonic F-35 jets. Wedgetail may join that formidable armoury and help us work together to take on the global threats that we both face.”

If selected, the aircraft would replace the Boeing E-3D Sentry, which entered service with the Royal Air Force in 1992. It was not disclosed how many aircraft the MOD intends on purchasing or at what price, though reportedly four to six aircraft are being considered at a total price of more than $1 billion. 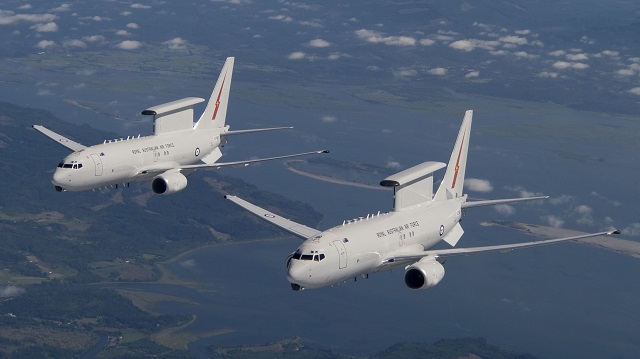 The MOD cautions that it has set up further discussions with Boeing and won’t come to a decision until after a formal approval process that would examine the RAF’s requirements and the aircraft’s price. Purchasing the E-7 Wedgetail from Boeing without open bidding might invite protests from competitors as well as from parliament.

UK's cross-party parliamentary Defence Committee in July made public its concerns about the MOD’s rumored intent on offering a contract for the E-7 Wedgetail without an open competition, noting that alternative aircraft platforms exist and should be considered. A likely alternative candidate could be Saab's GlobalEye, which is based on the Bombardier Global 6000 business jet, and is being developed for launch customer the United Arab Emirates.

The MOD says it favors the E-7 Wedgetail because it believes it is a proven and reliable aircraft. The ministry points out that it has been in-service with the RAAF for some time, which could reduce the risk normally associated with acquiring a complex new aircraft.

The MOD says it is also negotiating with Boeing to sweeten the deal by possibly carving out modification and life support work for UK companies.

The E-7 Wedgetail is based on the Boeing 737 commercial airliner family and is modified to carry on its back a tail-like active electronically-scanned radar made by Northrop Grumman that can surveil aircraft and ships across four million square kilometres over a 10-hour period.

Boeing has delivered six of the aircraft to Australia, four to South Korea and four to Turkey. No branch of the US military operates the aircraft and there are not outstanding orders for the platform from any country.