The UK Royal Air Force has received its 20th of an eventual 22 A400M Atlas transports from Airbus Defence & Space, while test flights of additional capabilities continue.

Announcing the delivery milestone on 13 July, the service said the airlifter's arrival at RAF Brize Norton in Oxfordshire "coincided with crucial trials to test Atlas’s ability to deliver cargo by parachute and undergo air-to-air refuelling".

The recent test activities included using an RAF aircraft to release 1t containers in sequence over the Salisbury Plain training area in Wiltshire, as part of an ongoing process to prove the Atlas's air drop capabilities.

Airbus and UK personnel have, meanwhile, advanced air-to-air refuelling trials involving a "Grizzly" test aircraft and an RAF A330 Voyager, during sorties conducted near the company's Seville site in Spain. This involved the Atlas receiving fuel "over a wide range of altitudes and air speeds". 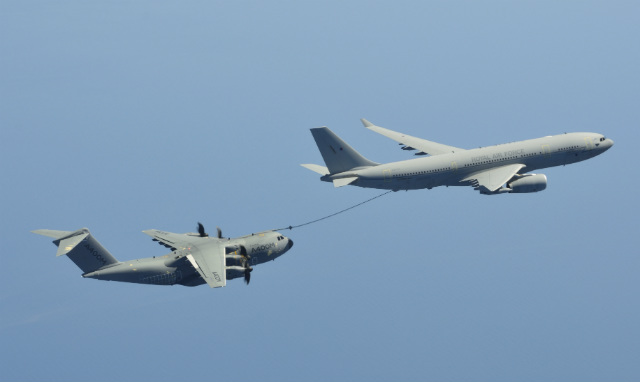 "The results from both trials are now being analysed, with a view to delivering operational clearances," the RAF says.

"We will continue to work hand-in-hand with Airbus and trials personnel to ensure that this fleet of world-leading aircraft is fully delivered and qualified for UK operations," says Adrian Baguley, director air support at the Ministry of Defence's Defence Equipment & Support organisation.

The RAF expects to take delivery of its remaining two A400Ms "by the early 2020s".