The US Air Force (USAF) claims that it achieved the longest known air-to-air missile shot in March 2021.

As part of a test, a Boeing F-15C Eagle fired a Raytheon AIM-120 Advanced Medium-Range Air-to-Air Missile (AMRAAM) at a BQM-167 subscale target drone and achieved a “kill”, the service says on 14 April. The missile test took place near Tyndal AFB in Florida as part of Weapons System Evaluation Program-East. The distance the missile was fired was not disclosed by the USAF. 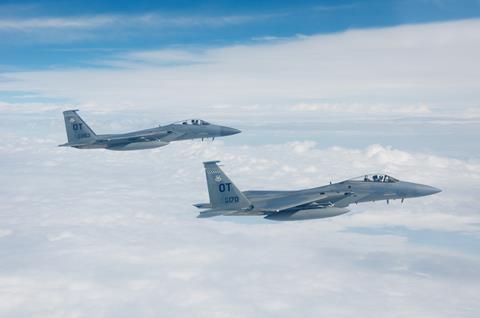 The range of the AIM-120D, the latest variant of the AMRAAM, has been reported to be about 87nm (161km). However, the exact range of the missile is classified, due to concerns about giving away information about combat aircraft limitations. The USAF did not disclose what variant of the AIM-120 was fired or what modifications where made to the missile.

The AIM-120 AMRAAM is radar-guided and can strike targets beyond-visual range as well as within-visual range. All fighter aircraft from the US Navy, US Marine Corps and USAF use the air-to-air missile. The F-15C can carry up to eight AMRAAMs under its body and wings.

The USAF plans to replace its ageing F-15C fleet with the newer F-15EX Eagle II variant.

The ability to hit a target with an air-to-air missile at longer ranges is especially important for non-stealthy, fourth-generation fighters, such as the F-15, which can be more easily spotted by an adversary at a distance. Beyond-visual-range missiles, coupled with long-range active electronically scanned array radar, such as the Raytheon APG-82(V)1, are seen as a way to keep fourth-generation combat aircraft relevant.

Correction: Article changed on 15 April to correct conversion between nautical miles and kilometres