The US Air Force is considering equipping some of its Fairchild Republic A-10C Thunderbolt II fleet with 3-D audio warning devices which are meant to improve a pilot’s situational awareness.

It is not clear how many of the A-10 “Warthogs” will receive the audio devices, though the USAF is examining making a sole source acquisition of between 150 to 200 units from the hardware’s manufacturer, Terma North America, according to a 5 November request for proposal posted online. The Danish Air Force has installed the system within the cockpits of some of its Lockheed Martin F-16 Fighting Falcon fleet, according to the manufacturer’s website.

The 3-D audio technology is meant to help pilots keep track of different warning and alert notifications, as well as radio communications, by assigning the noises various positions around a pilot’s head. Pilots are better able to distinguish audio information when it is associated with a physical location, the manufacturer says. 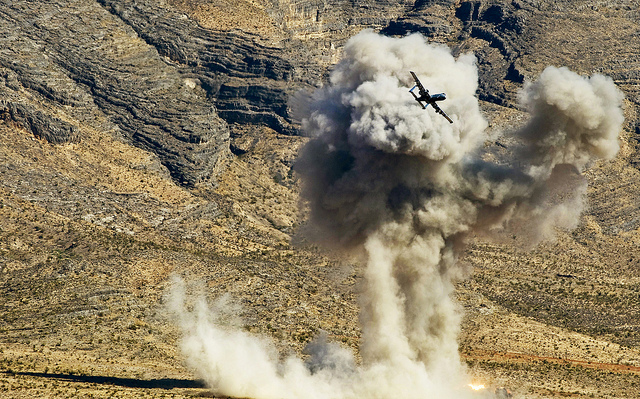 A-10 Thunderbolt II aircraft during weapons training at Nellis Air Force Base, Nevada

The system can alert pilots to the directions of threats, such as incoming missiles. Studies on the use of the audio technology in a cockpit showed that a pilot would perceive the direction of an approaching missile threat 1.5s faster compared to presenting the threat information in a cockpit panel mounted display, Terma says.

The technology also can separate speech from the individual crew members into the direction of their physical location. For example, when a co-pilot hears the voice of the gunner located right behind him, the voice appears from right behind.

The Fairchild Republic A-10C Thunderbolt II is a close-air support aircraft, designed to attack armored vehicles and tanks, as well as enemy troops. The USAF has 289 A-10Cs in service, according to Flight Fleets Analyzer.