As part of a joint effort with the US Air Force Research Laboratory, the 85th Test and Evaluation Squadron out of Eglin AFB in Florida said on 1 September that it validated new ways to drop the 907kg (2,000lb) bomb on surface vessels. The US Air Force (USAF) says it believes the use of JDAMs against ships would “change the maritime target lethality paradigm”. The service did not disclose how the JDAM was modified for attacking maritime targets or say what new tactics, techniques and procedures were used. 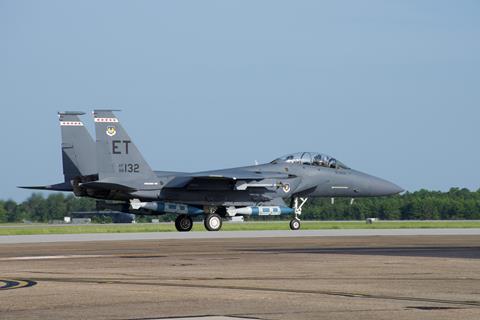 JDAM is a retrofit kit that turns an unguided BLU-109 bomb into a smart weapon using a tail section, inertial navigation system and GPS.

“For any large moving ship, the air force’s primary weapon is the 2,000-pound laser-guided GBU-24,” says Major Andrew Swanson, 85th Test and Evaluation F-15E weapons system officer. “Not only is this weapon less than ideal, it also reduces our survivability based on how it must be employed. This munition can change all of that.”

Swanson did not elaborate as to why the GBU-24, known also as the Paveway III, was “less than ideal”. However, the USAF says it is trying to “develop a low-cost method of achieving torpedo-like seaworthy kills from the air”.

Attacking surface ships from the air ought to keep submarines out of harms way. “A navy submarine has the ability to launch and destroy a ship with a single torpedo at any time, but by launching that weapon it gives away the location of the vessel,” says the service.

The US Navy (USN) is trying to find ways to deal with the Chinese navy, which recently became the world’s largest, according to the Department of Defense’s (DoD’s) 2020 Military and Security Developments Involving the People’s Republic of China report. In 2020, Beijing had 350 ships and submarines, compared to Washington’s 293 vessels.

While most naval analysts believe China’s ships and submarines are inferior to the USA’s, the sheer number of vessels the country could deploy – for instance, in support of an invasion of Taiwan – would mean the USN would have its work cut out for it. In response, the DoD is looking for cost-effective ways to sink large numbers of ships quickly using a variety of methods.