The US Air Force (USAF) has detonated an AGM-183A Air-Launched Rapid Response Weapon (ARRW) warhead for the first time.

The 780th Test Squadron detonated the warhead at Eglin AFB in Florida, the service said on 7 July. 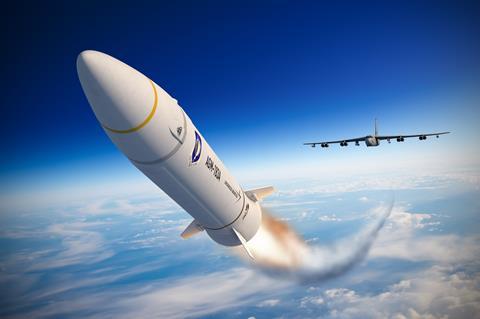 “The first-of-its-kind test for the air-to-ground, rocket-powered, high-altitude, hypersonic missile collected data on the lethality of the unique weapon,” says the USAF. In particular, the service says it was interested in gathering data on the unique “shape of the warhead”.

The USAF did not explain how the detonation test was performed, but the explosion appears not to be part of a hypersonic missile launch. The USAF attempted to fly an inert version of ARRW for the first time in April, but the test missile’s flight was aborted after a problem with its launch sequence. The service has planned another flight test this month.

The Lockheed Martin-made ARRW is to be the USAF’s first operational hypersonic missile, with initial operational capability planned for fiscal year 2022. The weapon is an air-launched, boost-glide hypersonic missile; meaning it is designed to be carried aloft by a bomber, such as the Boeing B-52 Stratofortress, dropped, and then carried to a high-altitude apex by a booster rocket, at which point the warhead separates and glides back to earth – and its target – at hypersonic speeds.

Whereas adversaries China and Russia are pursuing hypersonic missiles with nuclear warheads, the USA has decided to keep its arsenal conventional. That means the missiles must be more precise, given conventional warheads’ smaller blast radius.

Hypersonic speeds are defined as anything beyond Mach 5. Timing detonation at that speed is a challenge, as a missile would be travelling at 1,715m/s. The time window for maximally damaging a target is extremely small, with fractions of a second making a difference.