US Air Force fires first missile from F-15EX in test

The US Air Force (USAF) on 25 January completed its first test firing of a missile from a Boeing F-15EX fighter.

The successful launch of the Raytheon-made AIM-120 advanced medium-range air-to-air missile (AMRAAM) marks another step toward fielding the F-15EX with combat units. 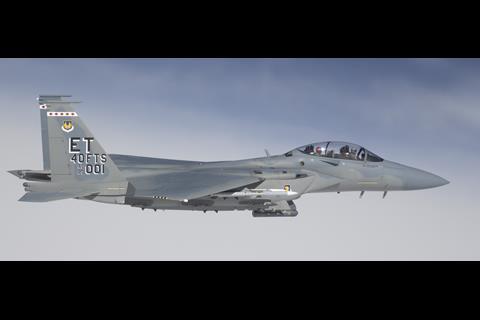 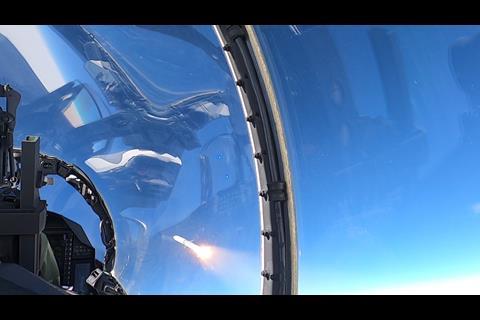 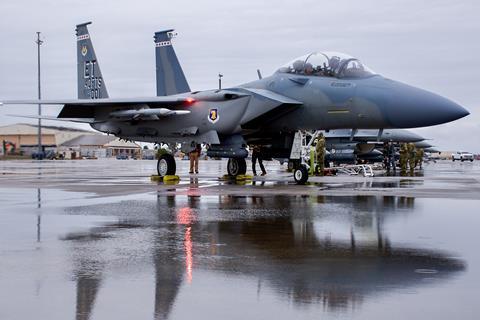 The F-15EX Eagle II took off from Tyndall AFB and fired the AMRAAM over the Gulf of Mexico at a Kratos Defense BQM-167 aerial target drone.

“During the flight, the F-15EX detected the drone using on-board sensors, acquired a weapons-quality track and launched the missile at the target,” says the USAF. “After tracking the missile’s release and flight toward the BQM-167, the shot was determined a… success, at which point the missile flight was terminated.”

The service plans additional missile tests on the F-15EX.

“This was an end-to-end verification of the entire weapons system, which will pave the way for more complex missile shots,” says Colton Myers, F-15EX test project manager with the USAF’s Operational Flight Program Combined Test Force.

The USAF has run F-15EXs through a series of tests since receiving its first example from Boeing last March. In May, two F-15EXs went to Joint Base Elmendorf-Richardson in Alaska for exercise Northern Edge 21.

“The Eagle II was pushed to its limits in the multi-service exercise and a significant amount of data was collected on the aircraft’s internal performance and how it performed with and against other aircraft,” says the USAF.

“This series of tests lead to the discovery of and resolution of issues identified in the F-15EX’s Suite 9 software system,” says the service.

In October, the military deployed the fly-by-wire aircraft to Nellis AFB in Nevada for further air-to-air combat exercises alongside older F-15Cs and F-15Es. The exercises helped the service observe differences between variants.

The USAF plans to acquire 144 F-15EXs to replace its ageing fleet of F-15C/D models, which are reaching the end of their useful life. The service plans to operate F-15EXs into the 2040s.