The event was the first time the service had witnessed a manned eVTOL aircraft take flight under its Agility Prime programme, it said on 21 August. Secretary of the air force Barbara Barrett, chief of staff General Charles Brown, and Chief Master Sergeant of the air force JoAnne S Bass watched the flight together. 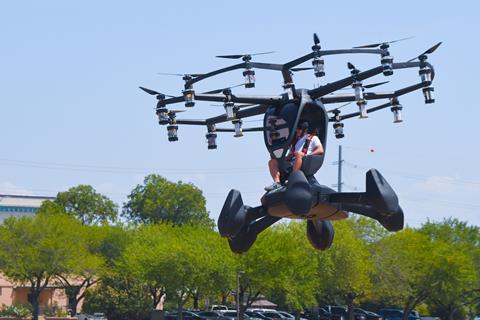 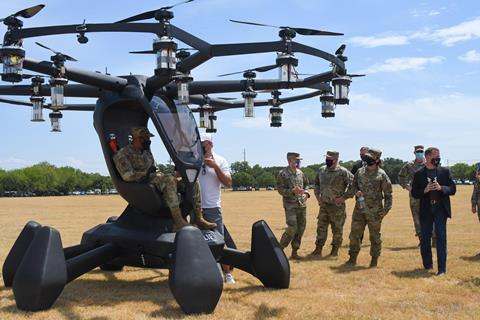 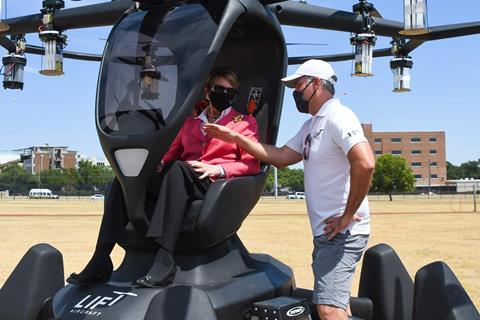 Secretary of the Air Force Barbara Barrett sitting in the Hexa

The demonstration was hosted by the USAF innovation group AFWERX and the Texas National Guard.

Startup LIFT Aircraft’s Hexa eVTOL platform carried one person as a passenger for an undisclosed period of time in the air as part of the event. The Hexa uses 18 independent electric motors and rotors to gain lift. It has a passenger capacity of one.

The Agility Prime programme is an effort to accelerate the development, testing and adoption of eVTOL aircraft for military as well as civilian uses. In April, the USAF committed to fund $25 million-worth of eVTOL projects in fiscal year 2021. It plans additional investments in the following years to speed at least one example of the new aircraft type toward achieving operational capability by FY2023.

“We now have over 15 of the leading aircraft manufacturers in the world applying to partner with Agility Prime, with many of them already on contract,” says Colonel Nathan Diller, AFWERX director and Agility Prime lead. “This flight today marks the first of many demonstrations and near term flight tests designed to reduce the technical risk and prepare for Agility Prime fielding in 2023.”

In addition to the USAF, the US Army is examining eVTOL aircraft as a means to resupply troops, as well as provide combat search and rescue. The autonomous flying ability of the aircraft would allow the services to keep human pilots out of danger on certain missions.