The US Air Force is researching alternative sources to produce the AGM-158 Joint Air to Surface Standoff Missiles-Extended Range (JASSM-ER).

The service is seeking capabilities statements from potential sources who could produce 360 units of the weapon and begin delivery approximately 27 months after the contract award date, which has not been announced, according to a notice online. This would be for the 17th production lot of the cruise missiles.

The USAF wants to know if potential alternative sources are capable of sustaining its inventory of missiles via supplying replacement parts, as well as demonstrating the ability to repair and properly store the missiles.

In total, more than 2,000 units of the air-launched cruise missiles, including the original and shorter-range JASSM, have been delivered from its current maker Lockheed Martin Missiles and Fire Control. The extended-range version of the missile is able to hit targets more than 500nm (926km) away, while the original variant had a range of more than 200nm (370km). 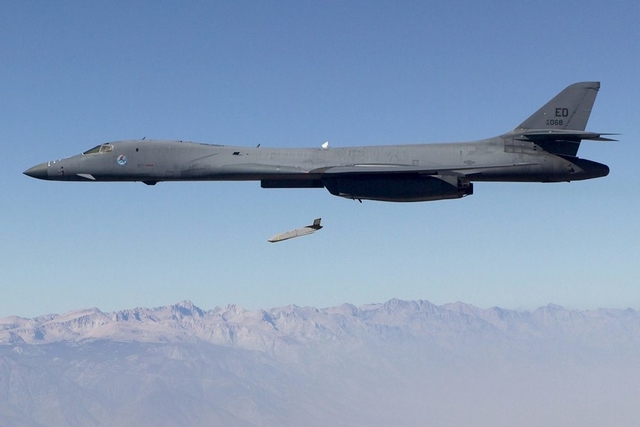 The JASSM is a low-observable cruise missile which flies at subsonic speeds and because of its range is able to be launched from outside an enemy’s air defenses. The JASSM-ER debuted in combat in April when two Boeing B-1B bombers released 19 of the missiles against alleged chemical facilities of Sryia’s Bashar al-Assad regime in retaliation to poison gas attacks on civilians.

JASSM is integrated on the USAF’s B-1B, Northrop Grumman B-2, Boeing B-52, Lockheed Martin F-16 and Boeing F-15E. The B-1B also carries JASSM-ER. Eventually, Lockheed Martin intends to integrate the weapon with the F-35 stealth fighter, though the cruise missile would have to be carried on the outside of the aircraft as it cannot fit inside the main internal weapon bays.

Lockheed Martin was awarded a $51 million contract from the USAF on 10 September to develop an even longer range version of the cruise missile, called Joint Air-to-Surface Standoff Missile-Extreme Range, which is reportedly designed to have a range of more than 1,000nm (1852km).

The USAF and US Navy are jointly developing AGM-158C Long Range Anti-Ship Missile (LRASM), which is based on the JASSM. Lockheed Martin was also awarded a contract of an undisclosed amount on 10 September to update the range, targeting, survivability and launch capability of the LRASM, according to a notice online.

The USAF and Lockheed Martin did not immediately respond to a request for comment.