As the US Air Force (USAF) potentially faces more complex and fast-paced battles in the future, where communications are likely to be disrupted, for example by jamming, it is rewriting its basic doctrine to emphasise “commander’s intent”.

In what it is calling “the most sweeping change of air force basic doctrine in the service’s history”, the USAF issued its Air Force Doctrine Publication-1 on 22 April. 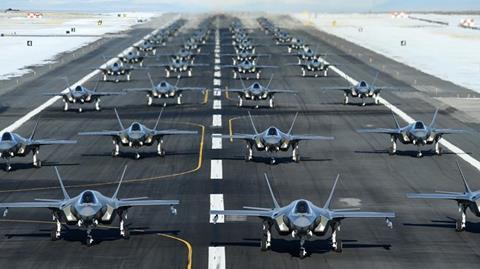 F-35As on an elephant walk exercise

“The document defines the concept of mission command as a return to the philosophy of mission accomplishment guided by the commander’s intent, while operating in environments characterized by increasing uncertainty, complexity and rapid change,” says the USAF.

“To drive commander’s intent, we have to be very broad in our thinking,” he says. “We have to give airmen the leeway, without being very prescriptive, to lead and execute while still meeting intent. When airmen are empowered, they’ll be able to make things happen that we didn’t even think about.”

As threats of electronic warfare from advanced militaries such as China and Russia grow, the USAF appears to be preparing for scenarios where top commanders are partially or totally cut off from pilots executing missions on the front lines. Operating in contested airspace may also require radio silence.

The USAF wants to maintain a centralised command, but in some situations also wants flexibility for distributed control of forces and decentralised execution.

To explain commander’s intent, the USAF says it plans to lean on mission-type orders, a plan that emphasises the “purpose of an operation rather than the details of how to accomplish it”.

Ultimately, what is rigidly prescribed or controlled by top commands, and what allows for flexibility, depends on the situation.

“Some situations – for example, high-value targets, time-sensitive targets, political sensitivities, covert and clandestine operations, offensive cyberspace operations, nuclear employment – may require a level of centralised execution of specific operations, most notably when the [joint force commander] wants to control strategic effects and manage risks at the sacrifice of tactical efficiency,” says the document.