The US Air Force’s (USAF’s) T-7A Red Hawk advanced trainer has fallen as much as 15 months behind schedule after parts shortages, initial design delays and the discovery of aircraft wing rock.

The in-development Boeing T-7A jet was scheduled to reach Milestone C, a pre-production programme review, in the third quarter of fiscal year 2022, according to USAF budget proposal documents. But, the service now anticipates it won’t reach that mark until the fourth quarter of FY2023. 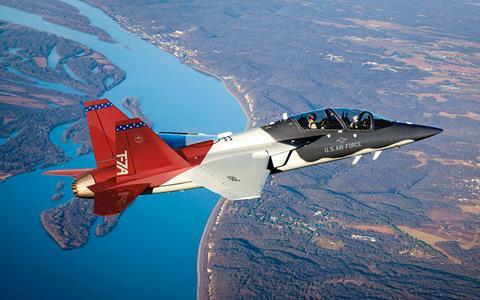 “The T-7 [Advanced Pilot Training] programme has inherent schedule risk because of the aggressive nature of the programme’s schedule,” says the USAF. “The T-7… programme office is continuously analysing methods to improve schedule and remains committed to working with Boeing to enable the T-7 programme to achieve [Milestone C] in 4Q FY’23.”

The service adds that the discovery of the T-7A’s wing rock, a type of instability at a high angle of attack, means that additional testing is required.

Boeing says the T-7A programme is seven months behind schedule versus the up to 15 months that budget proposal documents reflect. The company says much of that delay is caused by Covid-19-related disruptions to its supply chain.

General Charles Brown, USAF chief of staff, acknowledged the programme delay in a hearing before the House Armed Services Committee on 16 June. The service is still committed to the trainer, he says.

The USAF plans to replace its ageing fleet of Northrop T-38 Talon jet trainers with the T-7A. Boeing is on a $9.2 billion contract with the USAF to supply 351 advanced trainers and 46 ground-based training simulators as part of the programme.

The service has touted the T-7A as a leading example of model-based engineering, the use of software design programs to tightly integrate engineering, production and maintenance of an aircraft. In theory, a precise digital design is supposed to help manufacturers save time and money as costly errors are eliminated and some real-world testing is replaced with digital simulations.

In September 2020, the USAF created the “e” prefix for any aircraft that is created using digital engineering software programs. The Red Hawk was dubbed the eT-7A and was first aircraft to receive the label.

The USAF has said model-based engineering meant that the T-7A required 80% fewer assembly hours compared to a conventional development method. The service also said that the jet “moved from computer screen to first flight in just 36 months”.

The USAF has boosted model-based engineering as the future of aircraft development, claiming that it ought to save substantial amounts of time and money. It says the T-7A’s recent delay is not a poor reflection on digital engineering.

“Through the use of high-fidelity model-based systems engineering methods and early prototyping, the air force and Boeing team was able to identify the wing rock issue substantially earlier in the testing phase than would have been possible using traditional systems engineering processes,” says the service. “Traditional [Department of Defense] acquisition processes would not have identified the issue for another 24 months during operational test and evaluation.”

“The parts shortages are caused by global supply chain challenges, due in part to Covid-19. The initial design delays were due to initial delays in contracting suppliers,” the service says. “Digital model-based engineering would not have alleviated these concerns.”