US Air Force testing upgraded rotary launcher for B-52 bomber

The US Air Force started testing an upgraded version of the Boeing B-52 bomber’s Conventional Rotary Launcher on 11 February.

The new rotary launcher is designed to power up more munitions at a time, giving bombardiers the ability to quickly select from a greater variety of smart weapons at short notice.

Boeing installed the Conventional Rotary Launcher within the USAF’s fleet of B-52 bombers in 2016, giving the aircraft for the first time the ability to drop eight joint direct attack munitions from its belly. The launcher can also carry several Joint Air-to-Surface Standoff Missiles.

However, the system was limited to supplying power to only four munitions at a time, which slowed the rate at which bombardiers could drop weapons.

“The Conventional Rotary Launcher has a high power draw, so an aircrew could only power up four munitions at a time without risking blowing circuit breakers in mid-flight,” says Maj Jason McCargar, a 49th Test and Evaluation Squadron unit project officer. “With this upgrade, it can now have eight ready at once.”

The improved efficiency has the potential to lower the number of aircraft needed for missions, adds the USAF. 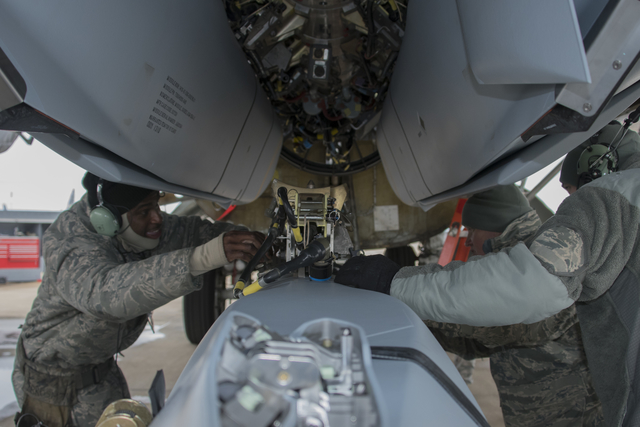 The ability to supply a full power load to all munitions on the rotary launcher, in addition to another 12 under the B-52’s wings, has the potential to improve the jet’s lethality in combat, says Senior Master Sgt Michael Pierce, 307th Maintenance Squadron aircraft armament superintendent.

“Now, a B-52 going into a war zone has the ability to put 20 munitions on a target area very quickly,” he says. “Before, they would have to drop some of their munitions, power up the [Conventional Rotary Launcher] again and then make another pass.”

Once testing is complete, the rest of the other Conventional Rotary Launchers in the Air Force inventory will be modified to the specifications of the test launcher, says the USAF.