The US Army is to take delivery of an Enhanced Medium Altitude Reconnaissance and Surveillance System – Vehicle and Dismount Exploitation Radar (EMARSS-V) aircraft with prototype upgrades.

The service is scheduled to receive one example of the upgraded EMARSS-V on 30 June at Sierra Nevada’s Hagerstown, Maryland facility, it said on 26 June. 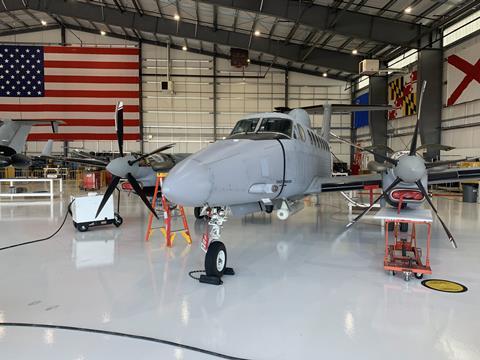 “The modified EMARSS-V aircraft has more powerful engines which allow for better performance at higher elevations and hotter temperatures during take-off,” says Colonel James DeBoer, fixed-wing project manager. “It also has the ability to operate out of a wider range of airfields because it uses less runway for take-off. A larger fuel capacity allows this aircraft to stay airborne longer for its ISR missions.”

The EMARSS-V is based on the commercial Beechcraft King Air 350. It is used to detect, locate, classify, identify and track vehicles and foot soldiers on the ground. That information is relayed to a US Army Brigade Combat Team that could use the information, for example, to coordinate an artillery attack.

“The [mission enhancement kit] reduces aircraft weight while increasing take-off performance in high and hot environments,” says the US Army. “In addition, the anti-lock braking system reduces take-off field length, which increases the number of suitable airfields where this modernised EMARSS-V can operate.”

The service says its current EMARSS aircraft loses 2h of flight time using its current engines in hot and high conditions. The US Army has a fleet of 24 EMARSS of different specialities, including aircraft with signals intelligence and wide-area surveillance equipment. 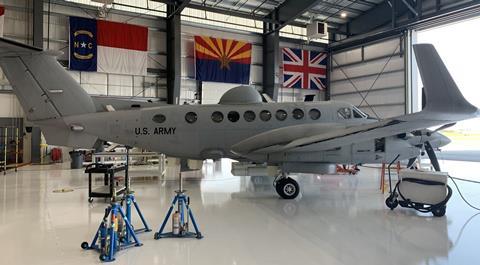 Electronics upgrades to the EMARSS-V include the addition of anti-jam and anti-spoof GPS and an encrypted Automatic Dependent Surveillance-Broadcast system.

The US Army finished the EMARSS-V aircraft upgrade and completed the aircraft’s final flight testing on 27 May.

US Army Contracting Command at Redstone Arsenal in Alabama awarded a $5 million contract to Sierra Nevada in September 2019 to prototype EMARSS-V upgrades.

To speed up the process, the service says it used an Other Transaction Authority contract, which allowed it to quickly start prototyping the new aircraft and could allow a future production programme of record to be rapidly established. Other Transaction Authority contracts are popular within the Department of Defense currently as the agreements have less red tape than the typical US government acquisition process.